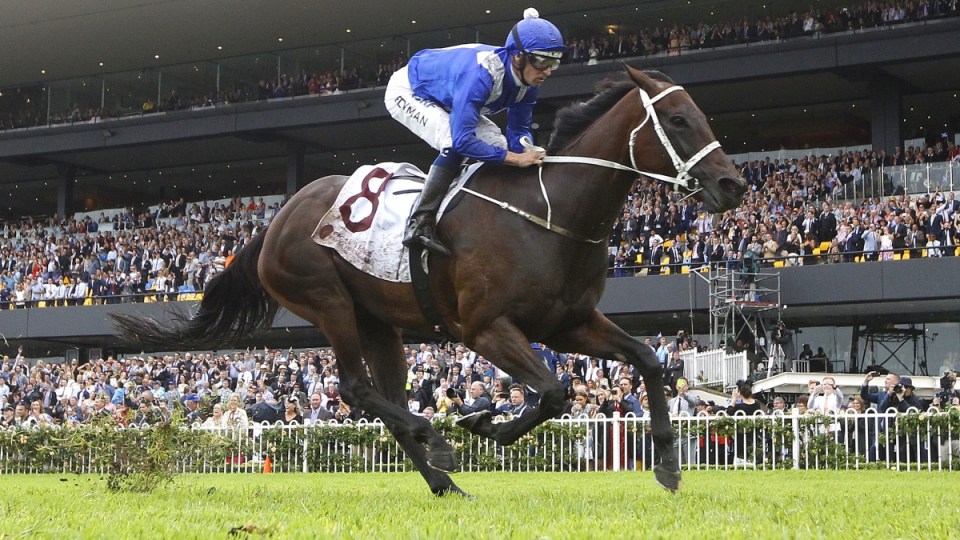 A $20,000 bargain buy has turned the $3.5 million Golden Slipper into a Cinderella story.

She Will Reign made dreams come true in the world’s richest juvenile race on a day when superstar mare Winx celebrated her sweet 16th consecutive win.

She Will Reign’s 19 average Australian owners include a group of five old footy mates, who chucked in $500 each a year ago thinking they would at least get a day out at the races.

“We were happy if we made the race track and maybe a day out together,” Sydneysider Michael Pes said of the mates’ decision to buy a five per cent stake.

“For this to happen, to win a Group One with our first racehorse, that’s what keeps racing alive I reckon.”

It was syndicator Scott Darby who spotted the potential of the “very athletic, lovely filly”.

He almost achieved his dream of a Golden Slipper last year with another of his bargain buys when the $10,000 Yankee Rose came second.

It’s like the NRL, he joked, “you have to lose one to win one”.
“We’re blessed,” Darby said. “I’m all about the Slipper. I love the Slipper. It’s a dream come true.”

It took trainer Gary Portelli half a dozen tries to achieve his Golden Slipper dream.

“I’ve been around a long time but I’ve finally got a Golden Slipper winner.”

Before the jubilant owners were chanting “She Will Reign” and “Benny, Benny, Benny” for jockey Ben Melham, Golden Slipper Day belonged to Winx.

The world’s best horse on turf had an easy victory in the $1 million Group One George Ryder Stakes at a soggy Rosehill racecourse, winning by more than seven lengths.

Trainer Chris Waller did not expect a win quite like that.

“She is just an amazing horse.”

Jockey Hugh Bowman knew before the horses had even jumped on Saturday that Winx had her 16th consecutive win in hand.

“I feel like she is in the prime of her career,” he said.

“I expected more tempo early but I knew on the way to the barriers she meant business today.”

The rain-dampened crowd of 13,568 cheered Winx to victory as one.

Part-owner Debbie Kepitis is no stranger to racing success as part of the Ingham family who count Octagonal among their many champions.

But crowd favourite Winx is something else.

“But when you have the whole of this racecourse willing her to win, it is just undescribable.”

Superstar mare Winx was not going to be denied her sweet 16th win in a row.

Sweet 16 in a row for super mare Winx