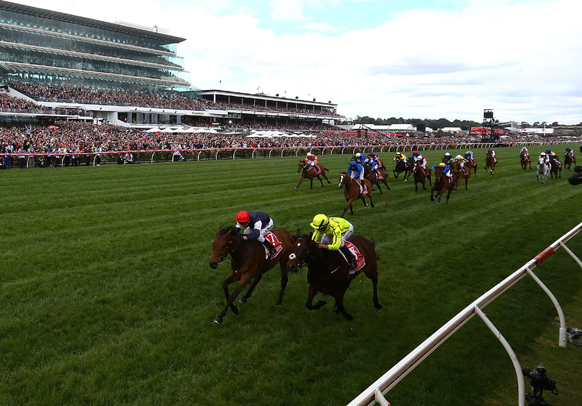 Almandin (on the outside) just holds off Heartbreak City to win the 2016 Melbourne Cup.

Victorian racing authorities considered scrapping more than a century of tradition by shifting the ­Melbourne Cup from the first ­Tuesday in November, but state Racing Minister Martin Pakula says the idea is a non-starter.

The AFL’s ability to dominate the news cycle prompted racing officials to consider moving the entire Spring Racing Carnival back in the calendar by as much as two weeks to give it breathing space in between the football and cricket seasons.

The chief executives of the Melbourne Racing Club, Moonee ­Valley Racing Club and Victoria Racing Club will meet this month to discuss the Carnival. A change of date would represent the greatest overhaul in the sport’s history, according to a News Limited report.

Pakula put all speculation to rest on Sunday morning when he quoted turf officials as assuring him the revered date would not be changed.

The report suggested that a racing official confirmed the “normal briefing between clubs” would discuss potential new dates for “the race that stops a nation”.

While talk of wholesale carnival change had been “loosely’’ ­discussed for years, it had become more significant since plans were announced to overhaul the schedule and conditions of the Caulfield Cup carnival.

There is also disquiet that the Turnbull Stakes, which heralds the start of the six-week spring racing carnival, has been held on the day after the AFL Grand final over the past two years, hurting betting revenue and crowd figures.

The Melbourne Cup was first run in 1861, on a Thursday, but shifted to the famous first Tuesday of November in 1875.