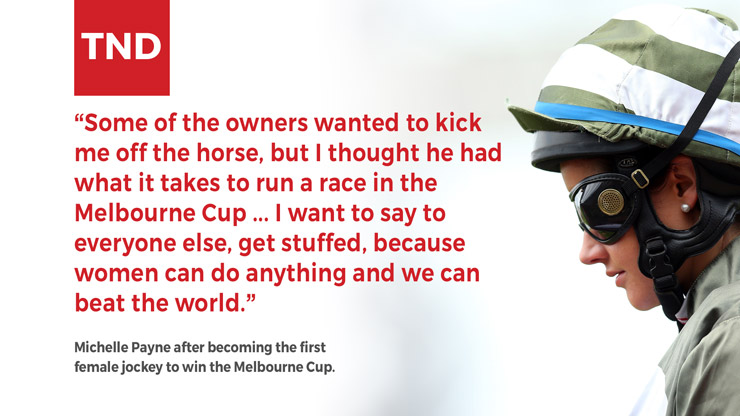 Melbourne Cup-winning jockey Michelle Payne’s condition has been upgraded to “stable” after she was injured in a horror fall at a race meeting in Mildura.

The family of the 30-year-old initially said surgery to repair her pancreas “went well”, but acknowledged earlier this week that there was a chance it may require removal.

Brother and trainer Patrick Payne said that she was in “quite dangerous territory” at the time.

But a statement issued by the family on Friday evening (AEST) said that Payne – previously in a “serious but stable” condition – was showing good signs.

“Michelle Payne has made good progress over the last few days and her family are pleased to advise that The Alfred Hospital has now listed her condition as stable,” it read.

“Fortunately, there have not been any significant complications following the abdominal surgery that was performed on Tuesday, 24 May.

“She is resting much more comfortably than earlier in the week.

“Michelle will continue to be carefully monitored as she progresses towards an extended period of rest and recovery.

“Michelle has asked to pass on how incredibly appreciative she is of the concern and support she has received since her injury.”

Payne’s horse clipped the hooves of another in Mildura, throwing her off.

And despite initial reports that she suffered only minor injuries, her condition quickly worsened. She was taken to Melbourne via air as a result.

Payne, who rode 100-1 shot Prince of Penzance to glory in the 2015 Melbourne Cup, has been active on Twitter in recent days. Payne has a history of serious injuries after starting her riding career in 2001.

She suffered a fractured skull and bruising to her brain in a 2004 fall.

She also broke four vertebrae and several ribs in a 2012 accident.

But this later injury is unlikely to encourage her into retirement, according to her brother, Patrick Payne.

Patrick – who trains the horse that his sister fell from – told Radio Sport National earlier this week that he had urged her to retire.

“You would think this would be the telling factor,” he said.

“We’ve been through this speech before with her, like we’ve said to her, ‘retire’ and all that sort of stuff.

“I even gave her a speech on Saturday night about retiring and then she started talking about having a ride in the Grand Annual next year.”

Responding to a Twitter message that urged her to give precedence to her health regarding the future of her career, Michelle Payne responded: “I promise it will. I have plenty of time to think it over and will let life lead me to the right direction. Thank you!”