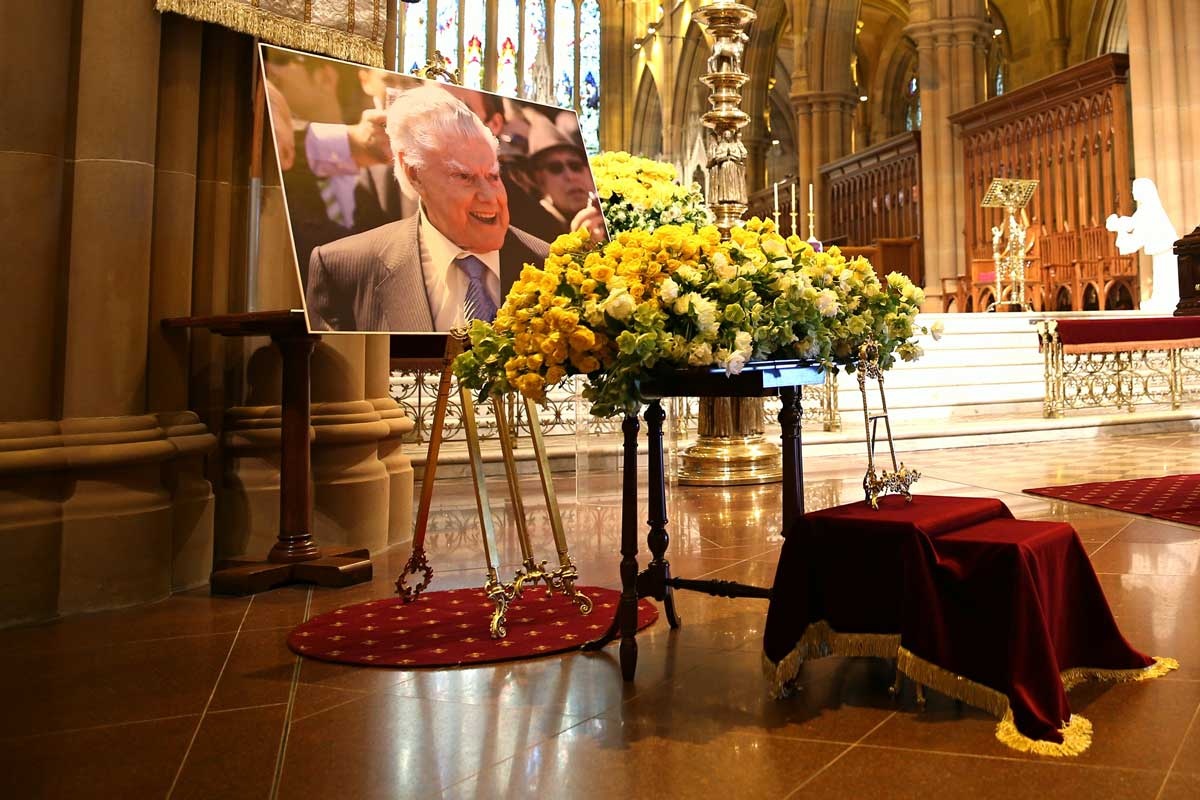 A state funeral service has been held in Sydney for the undisputed king of the sport of kings Bart Cummings.

The who’s who of Australia’s racing industry gathered in Sydney’s St Mary’s Cathedral to farewell a man who trained a record 11 Melbourne Cup winners.

The service began with the hymn Here I Am Lord and the national anthem, with the cathedral’s bells tolling 87 times at the conclusion of the service, once for every year of the trainer’s life.

• Australia mourns the loss of horse racing’s Bradman
• Bart in pictures: a legend of Australian racing

“His was a full life,” Archbishop of Sydney Anthony Fisher told mourners of the man known as the Cups King.

Archbishop Fisher told the congregation of the respect Cummings’ epic career had engendered around the world, from the cabbies that used to take him to Randwick, to leaders of government and industry, to the Queen herself.

He told too of Cummings’ “down to earth” faith, saying he even got journalists to church to hear his wry wisecracks afterwards.

“He was revered by Australians of every sort, from the cabbies who took him to Flemington and Randwick, to leaders of government and industry who liked to be seen with him,” he said.

“Even, I’m told, that great connoisseur of horse flesh, her Majesty the Queen.”

Cummings was, the archbishop said, “a faithful and charitable soul” whose love of God for his family had sustained him.

The archbishop said he was commending Cummings to the chief steward of the race that most matters.

“We pray that like St Paul he can say ‘I have fought the good fight, I have finished the race, I have kept the faith’. Now I await the trophy of righteousness, prepared by God.”

Daughter Anne-Marie Casey and grandson James, who followed his grandfather into the racing industry, then led readings.

Father Adrian Meaney said Cummings’s faith and his career on the track often intersected, and the trainer’s 61-year marriage to Valmae was one of his greatest achievements.

“They complemented each other, being both strong characters, though by nature, both rather reserved,” he said of their union.

He spoke too of Cummings’s innate ability to understand horses.

“Fortunately, his legacy is in safe hands as members of his family, with his blessing, have already stepped into his shoes,” he said.

He said Cummings also had a profound respect for nature and for animals.

“It was from his home on the banks of the Nepean River, filled with scent of nearby gum trees and his prized horses resting in the paddocks nearby, that Bart finished his race of life,” Father Meaney said.

“He had run his course with great courage. He was returning to his Father, to be at home with the God of surprises.”

Son Anthony Cummings, the only of Cummings’s five children to follow him into training, told mourners he was always in awe of his father, as people came to him for advice.

“(They) didn’t always get – didn’t like – what they were told, but what they got what they asked for: his view, unequivocal, unabashed, uncensored.”

He said is father was a man who believed there was no such word as no.

“He refused to accept that something he thought should be, or should happen, didn’t.

“Find a way, step back, look, see what you’re looking at, consider, but most importantly, never give up.”

Mr Cummings said his father had his ups and downs along the way, including the health issues that plagued him in the final year of his life.

“… but as we’d seen all the way through, there hadn’t been a bridle made to hold him back,” he said.

He said his father’s dream had always been to have his own property and Princes Farm on the Nepean River in NSW became that place.

“(It was) a touch of Ireland, a touch of New Zealand, a lot of Bart. He and mum lived there over the last few years and mum supported him as she had done all of her life – 61 years a couple of days before he passed,’ He said.

“He had a fantastic record with horses off the farm. Three of my Group 1 winners were raised there.”

He spoke of his father’s brushes with royalty, world leaders and the common man over his decades on the track.

“He treated all equally and gave them time. In the end, dad was more than a horseman – (he was) an icon, a legend, all of that, built from flames and hardship to go with success.

“Bob Hawke described him as a great and good Australian. Enough said.”