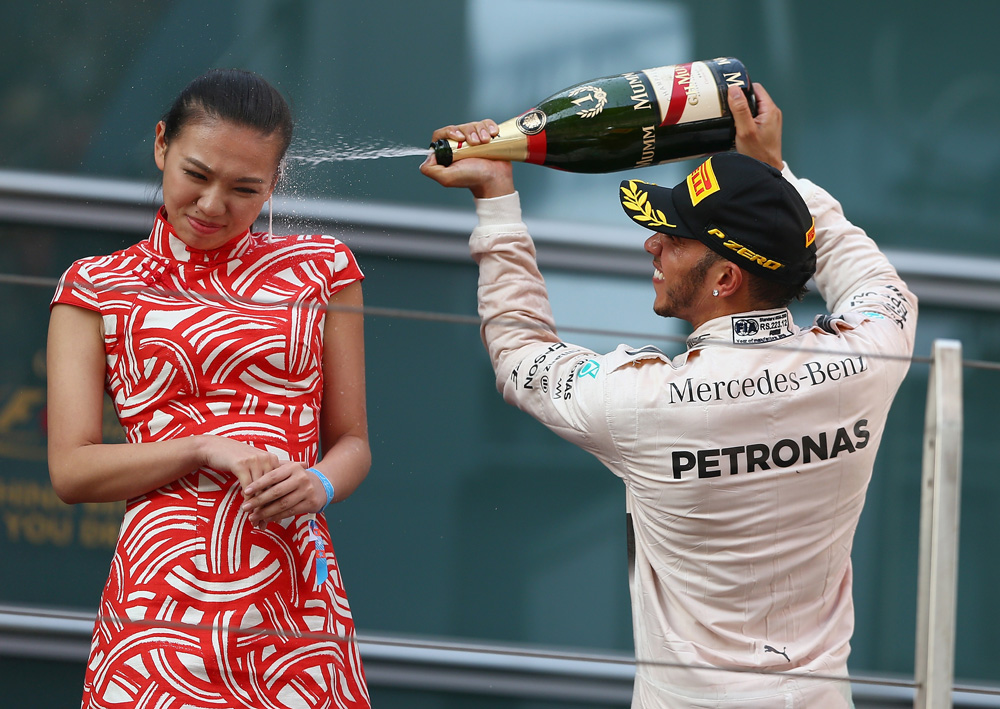 After being criticised by teammate Nico Rosberg for driving too slow, Lewis Hamilton’s win at the Chinese Grand Prix has been marred by another controversy.

The Formula One world champion has been slammed online and labelled “selfish” and “inconsiderate” after spraying champagne in the face of a hostess on the podium.

It’s the second time Hamilton, 30, has sprayed a grid girl with champagne – the first time after his win at the Spanish Grand Prix last year.

Speaking to the Mail Online, chief executive of anti-sexism group Object, Rox Hardie, said the move pointed to the wider sexism in sport.

“It is surely a very difficult position to be a grid girl and she would have had little option but to stand there and take it,” Ms Hardie said.

“That is something of which he should be aware. But instead, he appears to have abused her position.

“It’s unfortunate that a great victory has been marred by what appears to be selfish and inconsiderate behaviour.”

Social media users called Hamilton a “total pig”, a “scumbag”, a “massive jerk”, as well as an embarrassment, but many others jumped to his defence, saying people needed to get a grip.

Others defended Hamilton, saying that grid girls should expect to be covered in champagne after the race.

The champagne shower is customary in Formula One, but drivers usually cover each other in champagne, instead of directing it straight in the face of hostesses.

Some crazy women are out in force to criticise Lewis Hamilton for spraying someone with champagne on the podium. You’re actually mental. — Baked Brit (@BakedBrit1) April 13, 2015

I thought Formula One was a gentlemanly sport but that photo of Lewis Hamilton opening the champagne bottle onto a woman’s head is so AWFUL. — Megan Robinson (@threadnz) April 13, 2015

I can think of worse things to happen at work than getting sprayed in the face with champagne by @LewisHamilton .. Lighten up people! — Tash (@TashP351) April 13, 2015

This isn’t even sexism issue. If you choose to go on/near a podium after a race, expect to get covered in… http://t.co/rFaTvsHgsM