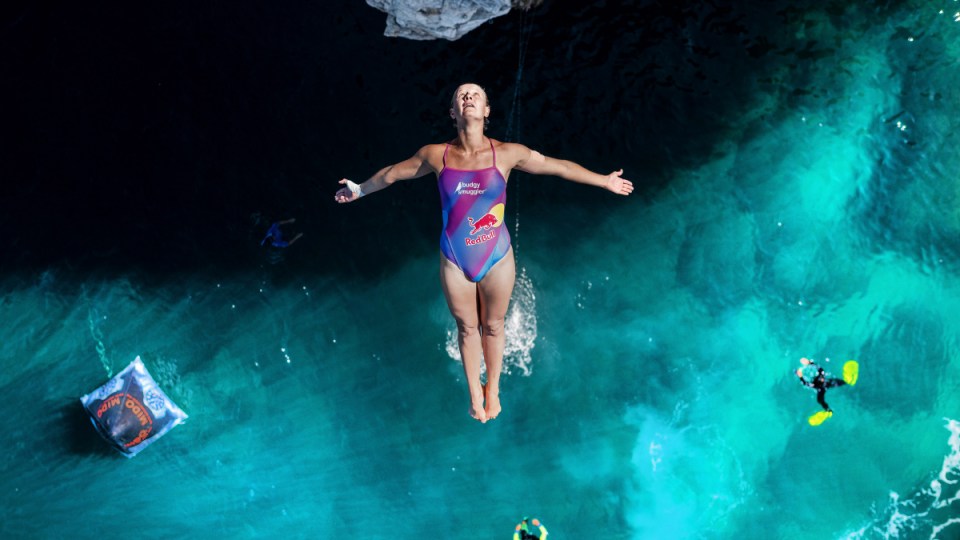 Rhiannan Iffland of Australia dives from the 21.5-metre platform in Polignano a Mare in Italy. Photo: Getty

Australian Rhiannan Iffland has won the women’s 2021 Red Bull Cliff Diving World Series for the fifth year in a row.

Iffland and French diver Gary Hunt, who took out the men’s title, won in style with dives from the 21.5-metre platform in Polignano a Mare, Italy, on Sunday afternoon (local time).

Earlier in the week, the two athletes had secured their championship wins at the second-last stop on the diving tour, in Puglia.

For Hunt, it was his ninth trophy win in 12 seasons, while Iffland continues to make a name on the spectacular European circuit.

“Yesterday it was a bit tricky to get started, because I’d already taken the World Series. Today I was speaking with friends and they were saying, ‘OK, just go up there and give it your all and make sure you smile through the whole thing’.

“So that’s what I tried to do and man, I can’t believe it. Two straight seasons and finishing off a day with 10s – well, I’m blown away.”

Iffland, who hails from Newcastle, in NSW, worked as an acrobatic trampolining and diving entertainer on cruise ships in the Mediterranean and Caribbean and trained at a theme park in Lyon before joining the European cliff-diving circuit.

Earlier this year, she became the first person in the world to dive out of a moving hot air ­balloon.

“This year the competition was very, very strong and I knew that before I even came to the beginning of the season,” she said.

“I had to push harder and harder. It feels nice to be a pioneer and to be the girl on the top spot.”

The Red Bull Cliff Diving World Series returned in 2021 after a 21-month gap.