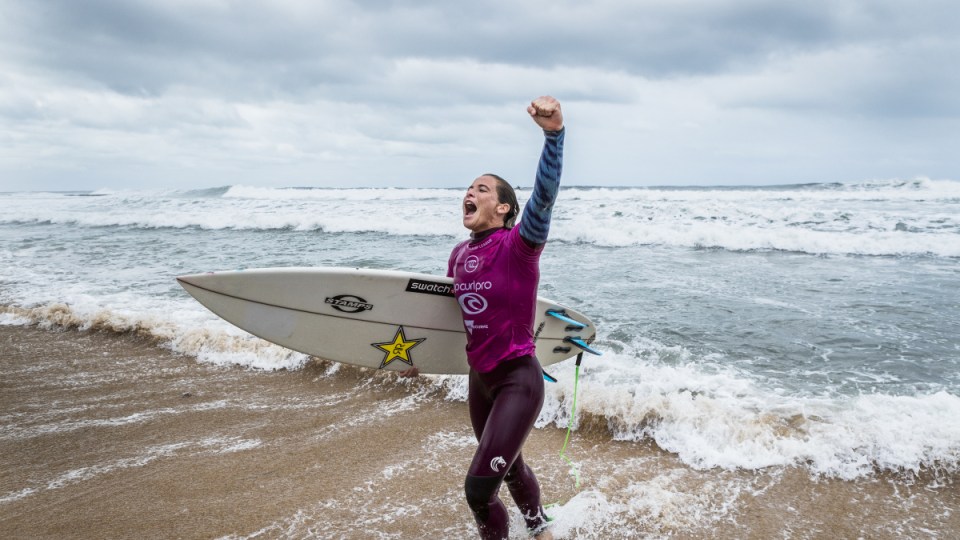 A jubilant Courtney Conlogue, of US, after winning the 2019 Rip Curl Pro at Bells Beach in Victoria. Photo: AAP

The Rip Curl Pro will return to Bells Beach on Victoria’s Surf Coast in 2022 and be held at the beach until at least 2024 under a new agreement between the state government and World Surf League.

The international surfing competition had been held at the surf break every year since 1961 but was cancelled for 2021 due to coronavirus.

The state government had admitted it was unable to give assurances to the WSL it could host international surfers in its hotel quarantine program come the Easter long weekend, when the competition is traditionally held.

The WSL asked if competitors could enter Victoria after completing 14 days of quarantine in NSW, but the government again could not guarantee that could happen. That led the WSL to announce the first Australian leg of the Championship Tour would be held at Merewether Beach in Newcastle, NSW.

Victorian Minister for Tourism, Sport and Major Events Martin Pakula said no one was happy about the event being cancelled, “but the public health advice was clear and protecting the health of Victorians is non-negotiable”.

“Given the priority of accommodating returning Australians in hotel quarantine, the government was unable to provide the WSL with a guarantee regarding quarantine places to enable the event to proceed at Easter,” he said.

The Rip Curl Pro generates up to $8 million for Torquay’s local economy and Surf Coast Mayor Libby Stapleton said the surf competition was “an integral part of our identity and economy”.

“The event attracts tens of thousands of visitors to the area, and for many it is an annual pilgrimage,” Cr Stapleton said.

“The global exposure it provides for our region contributes significantly to visitation.”

Although local traders, especially accommodation providers, have told the ABC the loss of the competition in 2021 is a blow to their income, they were hopeful the domestic tourism market would fill the gap.

Cr Stapleton said while it was disappointing, the shire fully understood the decision to cancel the event this Easter.

“The COVID-19 pandemic has led to the cancellation of many of our major events, including last year’s Rip Curl Pro and the international Cadel Evans Great Ocean Road Race and Race Torquay,” she said.

“I think that the World Surf League, Rip Curl and the Victorian government recognise that this event is really unique and we appreciate their efforts in having helped ensure future events will occur at Bells Beach.”

WSL Asia-Pacific general manager Andrew Stark agreed the cancellation of the competition was disappointing, but said he was “excited that this new three-year agreement will ensure the continuation of one of surfing’s most historical events”.

World Surf League to return to Bells Beach in 2022