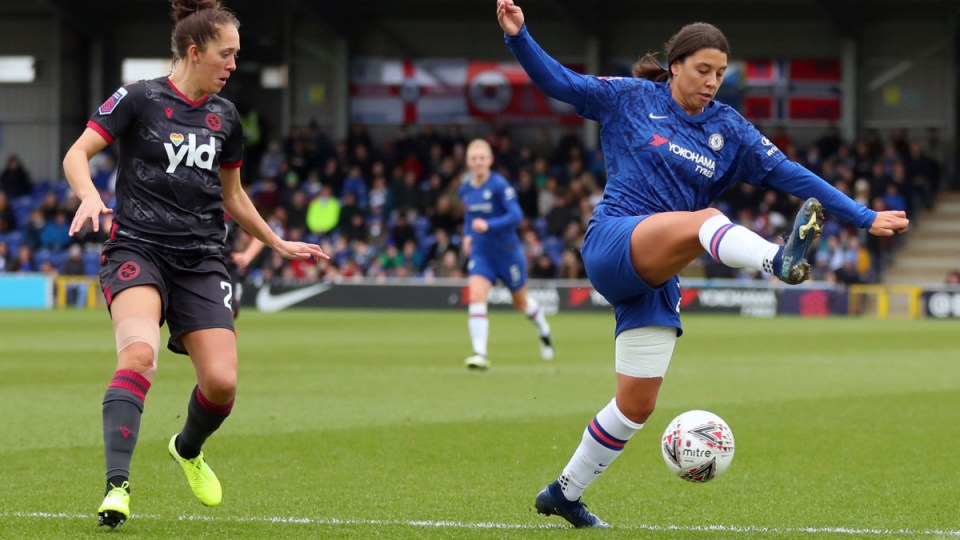 So what did Sam Kerr think of her first outing for Chelsea against Reading in the FA Women’s Super League?

“It’s freezing to be honest,” Kerr said after a 3-1 win and a massive ovation from the crowd.

“I’m enjoying it. The girls are quality and they’ve really welcomed me. I’ve settled in as best I can in nine days.”

The Matildas superstar only met her teammates for the first time last week, but was named in the starting line-up by Blues manager Emma Hayes.

Kerr acknowledged that adapting to a new city, climate and teammates has been a challenge, as has the rougher side of the English game given she was heavily targeted by Reading defenders.

I’ve had a few of those in-training [bumps] so I’ve already had my welcome to England.

“It’s a contact sport so I took one for the team. The last few years I’ve noticed that goalies and defenders have been a bit more rough, and I like it like that. I like to challenge myself against the best.”

Hayes was impressed with the Australian on and off the pitch and said it didn’t take much to persuade her to join the two-time WSL champions.

“I didn’t convince her, I didn’t put it on her,” the manager told AAP.

“I shared what our club is about. I got to know her and I didn’t put her under pressure. She was ‘a darl’ as she would say.

“She cares about what the team think about her and she will work and do her job for the team at any point. You can have top players, but to have a top player who is a top person, happy days.”

As a follically challenged gent, Shane Warne may be a man in need of a hat, but he’ll have one less after putting his prized baggy green cap up for auction to aid fire relief.

Warne’s Test cap is being auctioned for the Australian Red Cross fire appeal, joining Ash Barty, Daniel Ricciardo and other sports stars in offering support to Australians hit by the bushfires.

Barty is donating all her prize money from this year’s Brisbane International to help bushfire victims, while Ricciardo is auctioning a race suit from the Australian Grand Prix.

With some big hitters from the tennis world offering cash for every ace they make in coming weeks, Romanian world No.4 Simona Halep is aware her serving prowess is not her biggest strength.

She does however have an Australian coach in Darren Cahill and Halep has offered $200 for every instance of her giving him “a hard time” during her matches.

Without wishing ill on the pair, here’s hoping they spend the summer arguing.

Four-day Tests get thumbs down from Tendulkar

If there’s one thing that defines modern sport, it’s the tendency of the suits to meddle with a winning formula.

Hot on the heels of the AFL proposing shorter half-time breaks, cricket officials have proposed four-day Tests as a way of dealing with crowded summer schedules.

And while there’s been some support from former players, at least Indian great Sachin Tendulkar has lined up against the move saying it would unfairly disadvantage spinners and change the game.

Tendulkar told the Mumbai Mirror the loss of a day made the game less likely to include spinners.

“Spinners look forward to bowling with the scruffed ball, taking advantage on day five of the roughs created on the wickets,” Tendulkar said.

“All that is part of Test cricket. Is it fair to take that advantage away from spinners?

“There is T20, there is one-dayers and then there are T10 and 100-ball cricket. Test is the purest form of cricket. It should not be tinkered with.”

Australia’s Ricky Ponting has also rejected the move, saying there’s no evidence that teams are playing for draws.

Damon Hill is from one of the great formula one families, but even he knows a job for a lunatic when he sees one ….

“Lazio fans that were today at the stadium SHAME ON YOU!”

– Brescia forward Mario Balotelli is the latest black Italian footballer to suffer racist abuse while playing. It’s well past time Series A cleaned up its act.

Sporting Spud: Kerr roughed up, but it’s keeping her warm