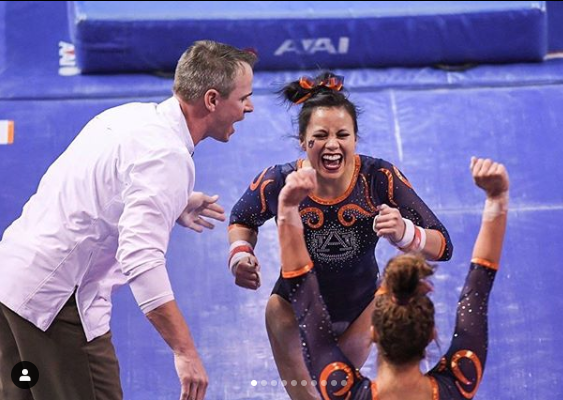 A young gymnast has ended her college career in agony after dislocating both legs during a floor routine for Auburn University.

Samantha Cerio was competing for Auburn when the horror injury occurred during an NCAA regional event in Baton Rouge, Louisiana.

Attempting a handspring double front flip with a blind landing, Cerio landed at an awkward angle and her legs buckled backwards.

She collapsed to the floor and the crowd was stunned into silence as the visibly distraught gymnast grabbed her knees in agony.

WARNING: The video contains scenes that may distress viewers

She was attended to by paramedics, before being removed from the floor on a stretcher after a long delay.

The extent of Cerio’s injury has not been confirmed yet, but it is suspected she broke both her legs as well as dislocating both knees.

She thanked her team for always being by her side and letting her “be a part of something bigger than myself”.

“Friday night was my final night as a gymnast. After 18 years I am hanging up my grips and leaving the chalk behind,” she said.

“I couldn’t be prouder of the person that gymnastics has made me to become. It’s taught me hard work, humility, integrity, and dedication, just to name a few.

“It’s given me challenges and road blocks that I would have never imagined that has tested who I am as a person. It may not have ended the way I had planned, but nothing ever goes as planned.”

Auburn coach Jeff Graba said the university’s team rallied around their teammate after the mishap.

“It was pretty tough to watch,” he said.

“She’s a trooper. The last thing she said was ‘Go help the girls’.

“The girls rallied around her. They’re doing this for her right now.”

"We said stick it for @sam_cerio, so we definitely came out here to make her proud."

This Auburn team wraps up a special season in Regional Final.

The college senior was already likely to be at the end of her gymnastics career when Auburn’s run finished in the NCAA Championships – Auburn came fourth in the regional final, ending the team’s season.

Days before sustaining the injury, the aerospace engineering major spoke to reporters for the Auburn University website.

“We’re not just people who do sports and that’s all that matters to them, because it’s not,” Cerio said.

“It’s one layer to a multi-layered personality.

“My parents have been the most supportive people ever, but they always reminded me that gymnastics won’t always be there for you.

“Yes, if you’re doing it, you want to do your absolute best because there’s no reason to put yourself through training for so many hours a week and putting your body through so much stress if you’re not going to do it to your best potential.

“But they always reminded me that gymnastics will end eventually, and you need to have something to fall back on, something that you can be passionate about just as equally.”

Cerio was president of the university’s Student-Athlete Advisory Council.

She will graduate in May and will take up a job with an international aerospace firm.