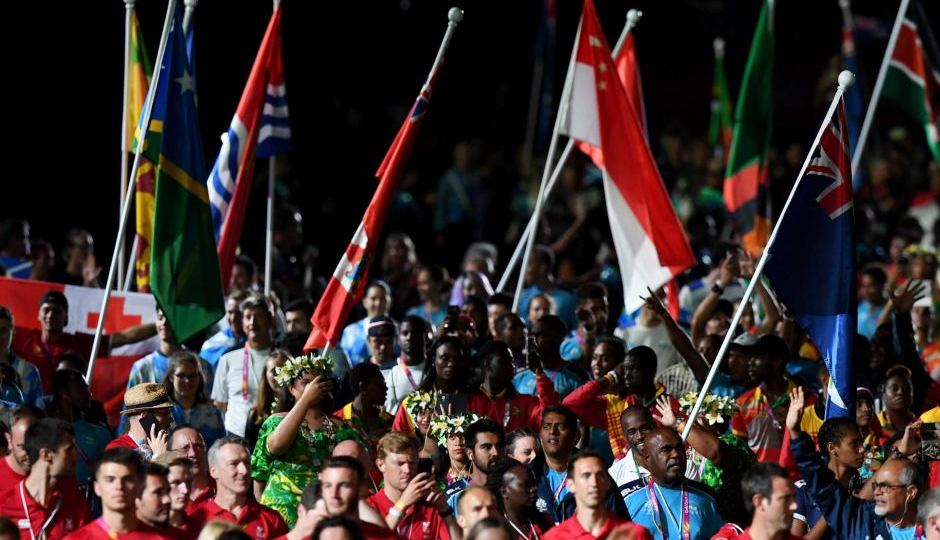 Athletes are seen before the start of the closing ceremony. Photo: AAP

Channel Seven aired My Kitchen Rules rather than a pre-Commonwealth Games closing ceremony honouring athletes because it was concerned about ratings, according to a leading media analyst.

Steve Allen from Fusion Strategy said he believed it was the right decision, and that it would have been “locked in” weeks earlier to maintain the network’s ratings edge over Channel Nine.

“It was kind of a commercial imperative from the way we see what they were doing strategically,” Allen said.

“Nine really bested them from the start of the year – first in February with Married at First Sight – and it depressed the ratings of My Kitchen Rules (MKR).

“Nine was launching on the Sunday night with The Voice, regardless of what Seven was doing.

Allen said while Seven won ratings gold during the Games, it could have lost out big time by postponing MKR‘s relaunch to Monday night.

“I think that is some of the choice they made. They said ‘right, we know we are going to have a strong lead-in in ratings from the Gold Medal Group two-hour special at 4pm. It will lead into our news, we will have a strong news, we have had that all the way through the Commonwealth Games. We will lead straight out of that into MKR, we will revive the ratings of MKR‘,” he said.

Seven had been accused of snubbing the athletes at the closing ceremony, despite claiming to be shocked by the decision, which it maintains was made by the Games organising committee (GOLDOC) and the host broadcaster providing the vision.

But as rights holders, Seven attended a media briefing before the ceremony, complete with a 34-page media guide detailing minute-by-minute how the event would unfold.

‘A pack of whingers’

GOLDOC chairman Peter Beattie apologised on Monday morning, saying they got it wrong in bringing the athletes into stadium early.

But by Tuesday afternoon, he told Sky News he had had enough of taking the blame and that people making negative comments were “whingers”.

“One of the problems we have got is we are getting to the stage of being a pack of whingers,” he said.

“When people try and do positive things everybody who wants to whinge whinges. I just say to Australia we are bigger than this.

‘Seven made the right commercial decision’

Allen said when they realised the athletes were to be largely ignored, Seven made a commercial decision rather than an emotional one that he believed was the right one for the network to make.

“Business-wise, commercially wise, yes I think it was — from the point of view that 98 per cent of the Commonwealth Games had been covered and covered pretty damn well in my view,” he said.

“It was a stumble at the end and disappointing. But they have got MKR for the next four weeks from memory on air. They really had to get it back up to ratings.

“Indeed on that evening, it rated better than it had been all the way through since February.

“I am pretty sure they were locked in. But yes, at that point they could have made other decisions.”

MKR attracted 1.3 million viewers, while The Voice bought in 1.02 million for Nine.

While Games bosses have worn most of the blame, admitting it was they who got it wrong, social media criticism of Seven’s decision continues.

It also got personal, with Seven’s Johanna Griggs taking umbrage at an ABC report by senior sports reporter Tracey Holmes, who argued the network was not blameless in the controversy over athletes being snubbed in the closing ceremony.

Griggs and co-host Basil Zempilas tore strips off the ceremony on air, slamming it as rubbish following a torrent of abuse on social media.

Holmes argued Seven knew all along the athletes were to be snubbed.

An angry Griggs tweeted that her integrity had been attacked by Holmes, someone who had an “axe to grind against Seven”.

Holmes replied: “When people want to start playing the man and not the ball then clearly they have a reason for trying to divert attention from the main issue.”

“The main issue was that Channel Seven knew this was going to be the case and effectively Johanna Griggs admitted that in her statement.”

Holmes said she had no problem with Channel Seven making a commercial decision, but “just be honest with the viewers about what you knew when”.

“The basis of my story still stands. There was certainly no personal malice on my part towards Johanna Griggs,” she said.