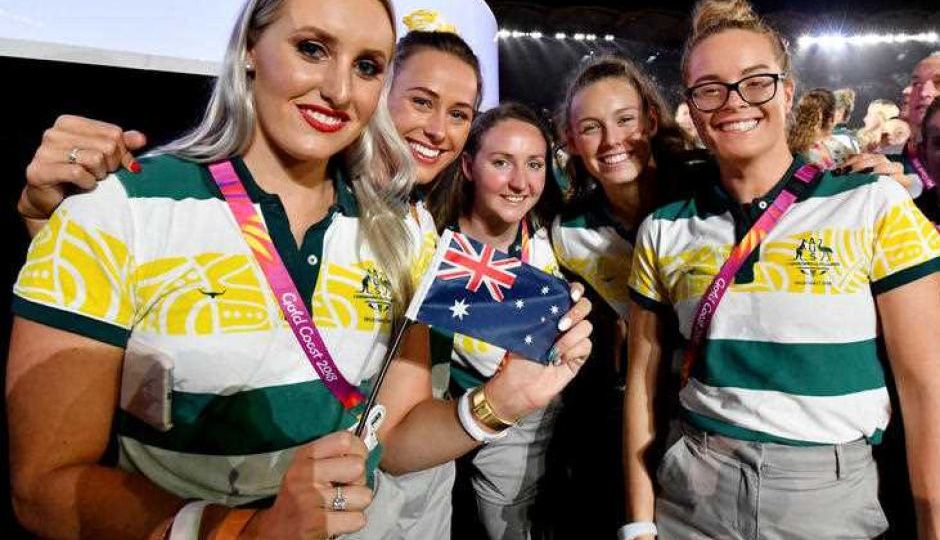 Athletes from Australia enter the stadium before the start of the closing ceremony. Photo: AAP

Channel Seven was aware athletes would be largely snubbed from the Commonwealth Games closing ceremony despite claiming to have been as shocked by the decision as the millions who watched it, it has emerged.

The network stoked anger among viewers with an attack on the Games organising committee and host broadcaster after a torrent of Twitter abuse throughout last night’s event.

The athletes entered Carrara Stadium before the television broadcast and were rarely shown to TV audiences as they stood in darkness on the fringe of the stage.

There were reports many began leaving the venue less than an hour into the event, which also featured long, rambling speeches from politicians and dignitaries.

After unhappy viewers expressed their disgust on social media, Channel Seven presenters Johanna Griggs and Basil Zempilas gave an impassioned defence of the network, saying it was not responsible for not broadcasting footage of the athletes.

Griggs said: “People are thinking that Channel Seven has chosen not to show pictures of athletes or not to show the athletes flag bearer Kurt Fearnley and other flag bearers from other nations coming in.

That led sentiment to swing back in favour of Channel Seven who reportedly paid $40 million to be the Games’ television rights holder and the channel continued to push this line on its morning shows on Monday.

However, it is standard practice for a minute-by-minute rundown to be made available to those who will be covering the ceremonies — sometimes 48 hours in advance — and this practice was followed by Gold Coast 2018 Commonwealth Games Corporation (GOLDOC).

Prior to the Gold Coast closing ceremony all rights holders, including Channel Seven, were given a minute-by-minute briefing on Saturday morning detailing how the closing ceremony would unfold — complete with a 34-page media guide.

The guide makes no mention of athletes marching in as part of the ceremony. Organisers confirmed Channel Seven had a number of representatives at that briefing.

In a statement released by Griggs on Monday night, she reiterated that: “If we’d left that briefing room with any indication given to us that no athletes would feature, then of course we would have made other arrangements to capture those moments.

“We knew at that meeting that the organisers were going to try something different, by not having the athletes enter the stadium in the main show which started at 8.30pm, and that they would already be there.”

Firstly, thank u to everyone for your overwhelming support around this issue. I’m still sad that a wonderful Commonwealth Games has been tarnished with such a sad ending. But when someone has a crack at your integrity, u have to respond. I hope this answers some of your questions pic.twitter.com/BHY1mTvsSO

Chairman of the organising committee, Peter Beattie, on Monday morning admitted it was a mistake on the part of GOLDOC not to include the athletes as part of the ceremony.

But a former Olympic and Commonwealth Games ceremony organiser suggested Channel Seven, an experienced major-event rights holder, could have influenced the plan for the ceremony or broadcast the athletes entering the stadium.

Ric Birch, who was head of ceremonies for the Sydney 2000 Olympic Games and the 1982 Brisbane Commonwealth Games, said: “I’m certainly surprised that Seven did not raise the issue of the athletes’ entrance prior to the closing ceremony.

“Back in the day of Sydney 2000, Dick Ebersol of the NBC network was able to overturn the host city agreement and the IOC Charter by insisting that the athletes not be permitted to be in the stadium watching the ceremony prior to the Parade of Athletes.

“If NBC could change the IOC’s policies, I’m sure that Seven could have prevailed upon the GC2018 Organising Committee and the host broadcaster.”

As a rights holder is entitled to do, Channel Seven had a camera in-field to film the arrival of the Australian team and flagbearer Kurt Fearnley.

It was also free to start its coverage earlier than the ceremony’s designated start time and play its own exclusive footage of the team arriving to the cheer of the crowd but aired an episode of My Kitchen Rules instead.

It also chose not to mention any of this detail before the ceremony began or at any time during it but only after the official coverage had ended and Twitter had gone into a #ClosingCeremony meltdown.

A dancer in the closing ceremony said she was shocked viewers at home did not see athletes and flag-bearers entering the stadium as she and hundreds of others thought they were on air.

Simmone Bernetzke said she was completely surprised when a friend told her the athletes arriving to the stadium was not shown on screen.

“I was astounded, I honestly thought she was joking,” Ms Bernetzke said.

“I was one of hundreds of dancers and we had the most exhilarating experience and I’m gutted that Australia missed out on it,” she said.

“It was a rocking moment and the entire stadium roared … the athletes were sent in and the cameras were there, they were tested in rehearsal, we saw it on the big screen.

“When I found out this morning that people didn’t see the entrance I was mortified.”

“I don’t get why you’re apologising Mr Beattie, because to be really honest you don’t know what’s going on behind the scenes of television production.

“The crew that were responsible for creating the ceremonies did a phenomenal job.

“They have years of experience … and Channel Seven had a responsibility to carry the entire presentation of the Games from whoa to go.”

“They were responsible for getting it right and if you can’t get the athletes right what are you doing taking on the project?”