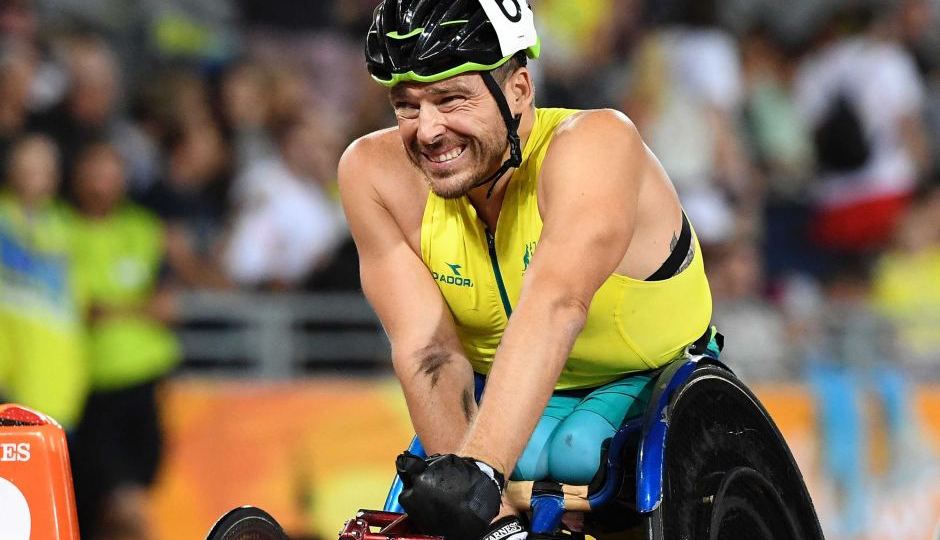 Fearnley's speech held an audience of Australia’s sporting greats and luminaries spellbound with its messages of hope and inclusion. Photo: AAP

Kurt Fearnley arrived at the Gold Coast Commonwealth Games wanting to make a statement both on and off the track.

True to form, the three-time Paralympic gold medallist produced one of his trademark gutsy displays to finish second in the T54 1500 metres final at Carrara Stadium on Tuesday night, while he will now get ready to make his farewell appearance in Australian colours in Sunday’s marathon.

But Fearnley’s most powerful message did not come through his dogged performance in winning a silver medal.

As he met the media to reflect on the 1500m final, the 37-year-old delivered an impassioned address calling for Australia to embrace inclusion of people with disabilities and use the example of the 2018 Commonwealth Games as a template as to how this can be achieved.

Games organisers set out to make the Gold Coast edition the most inclusive yet and Fearnley believes they delivered on their promise.

Seven sports are being contested by a record 300 para-athletes, which is a 45 per cent increase on the number of participants in the 2014 Games in Glasgow.

There are 38 medals on offer, a 73 per cent rise of what was up for grabs four years ago.

Fearnley is impressed organisers made inclusion a priority and he is proud that para-athletes and the Gold Coast crowds attending the Games have matched this commitment.

“The crowd is loving it; the TV is doing a great job. Let’s talk about it further.”

When Fearnley talks about using the Gold Coast Commonwealth Games as an example of how to strive for the inclusion of people with disabilities, he is asking for this to be reflected in everyday life.

“I’ve been put in this position of privilege over the past week that I would never have imagined being in,” Fearnley said.

Let’s have that same conversation about what is happening here [on the Gold Coast] at home about our education facilities, about our transport, about employment.

“Let’s have that same conversation about what is happening here [on the Gold Coast] at home about our education facilities, about our transport, about employment.

“You’re sitting at home and you’re watching these guys, these guys with disabilities just nailing it.”

Fearnley has been staggered by the level of support the para-athletes have enjoyed from spectators at the various Games venues on the Gold Coast.

When asked what it was like to compete in Carrara Stadium during the 1500m final he said, “the crowd almost blew my head off”, and he can expect an even louder reception when he takes to the streets of the Gold Coast in the marathon on the final day of competition.

But as encouraging as the energy and goodwill created by the Commonwealth Games has been, Fearnley stresses it will be to no avail if progress is not made elsewhere.

“Let’s have this conversation on a greater level and let’s make sure we can do something positive for what’s happening right here,” Fearnley said.

“It’s working, it’s good, it’s the right thing to do. Now let’s use it as a pivotal moment. Tomorrow morning have that yarn wherever you are.”