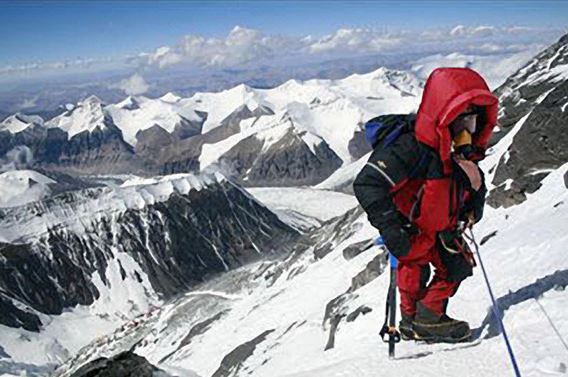 Katie Sarah hauls herself toward the summit of Everest -- just one of the 14 peaks she conquered. AAP

Adelaide climber Katie Sarah has joined an elite group, becoming only the eighth person and the first woman to conquer the “seven-seven” – the highest peaks and volcanic mountains on each of the seven continents.

Sarah has just returned from Antarctica where she successfully reached the 4285-meter summit of Mount Sidley, braving temperatures of 30C below zero.

That rounded out the last of the “seven-seven”, a feat only completed before by seven others, all men.

“Camping in the crater of the volcano in Antarctica, almost 1000km away from any other humans, was extraordinary,” she said of this most recent climb.

“Knowing that fewer than 40 people have ever climbed it in the millions of years it has existed is quite awe-inspiring.”

The 49-year-old completed five of the seven volcano climbs within the past 12 months and said all were special and all had allowed her to travel to some of the world’s most remote and exciting places.

“Oddly, Iran (Mt Damavand) was a highlight with the people very friendly and welcoming,” she said.

“I’ve always had a fascination with volcanoes. I just think they are such stunning and raw parts of our planet.”

Uphill all the way, but SA climber’s ‘seven-seven’ is a world first