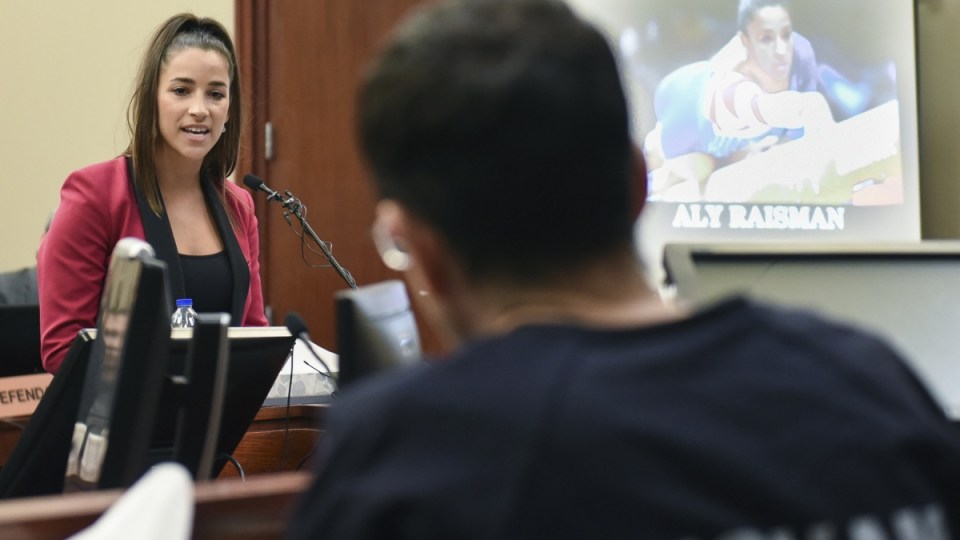 Aly Raisman (left) told Larry Nassar (right) he should have been locked up "a long time ago". Photo: Getty

Olympic gold medalist Aly Raisman has confronted her former doctor who has pleaded guilty to multiple sexual assaults, warning him that the testimony of the “powerful army” of 140 survivors at his sentencing will haunt him in prison.

More than 80 of the women and girls whom Larry Nassar, 54, abused under the guise of medical treatment have stood before the court during a marathon sentencing hearing, describing with eloquence and sometimes tears the harm Nassar did.

“Larry, you do realise now that we, this group of women you so heartlessly abused over such a long period of time, are now a force, and you are nothing,” Raisman, 23, said.

“I am here to tell you to your face, Larry, that you have not taken gymnastics away from me. I love this sport, and that love is stronger than the evil that resides in you, in those who enabled you to hurt many people.”

Facing pressure over how Michigan State University handled allegations made against Nassar when he was employed there, the school’s board of trustees on Friday asked the state’s attorney-general to investigate. But the board also stood by university president Lou Ann Simon, who is facing growing demands to resign or to be fired.

Raisman said if just one adult had believed Nassar’s accusers and had, “the courage and character to act, this tragedy could have been avoided. I and so many others would have never, ever met you”.

“Larry, you should have been locked up a long, long time ago.”

Nassar pleaded guilty to molesting girls at his university office, at home and at a Lansing-area gymnastics club, sometimes in the presence of parents, who were shielded from seeing what he was doing.

Already sentenced to 60 years in prison on a separate federal child pornography conviction, the 54-year-old can expect to be behind bars for the rest of his life. Raisman hoped the testimonies of her fellow survivors will never leave him.

“All these brave women have power, and we will use our voices to make sure you get what you deserve – a life of suffering spent replaying the words delivered by this powerful army of survivors,” Raisman said.

She also criticised Nassar for writing a letter to County Court Judge Rosemarie Aquilina complaining it was too hard for him to listen to the testimony of his accusers.

“As for your letter yesterday, you are pathetic to think that anybody would have any sympathy for you. You think this is hard for you? Imagine how all of us feel,” Raisman said.

“You are so sick, I can’t even comprehend how angry I feel when I think of you,” she added.

Nassar, who has often looked down or stared blankly at victims giving statements, broke down when longtime family friend Trinea Gonczar spoke.

“I don’t know who you are now. Maybe I never knew. Maybe none of us did,” she said, as Nassar took off his glasses and wiped away tears.

‘You are nothing’: Olympian Aly Raisman confronts ex-doctor and abuser Larry Nassar