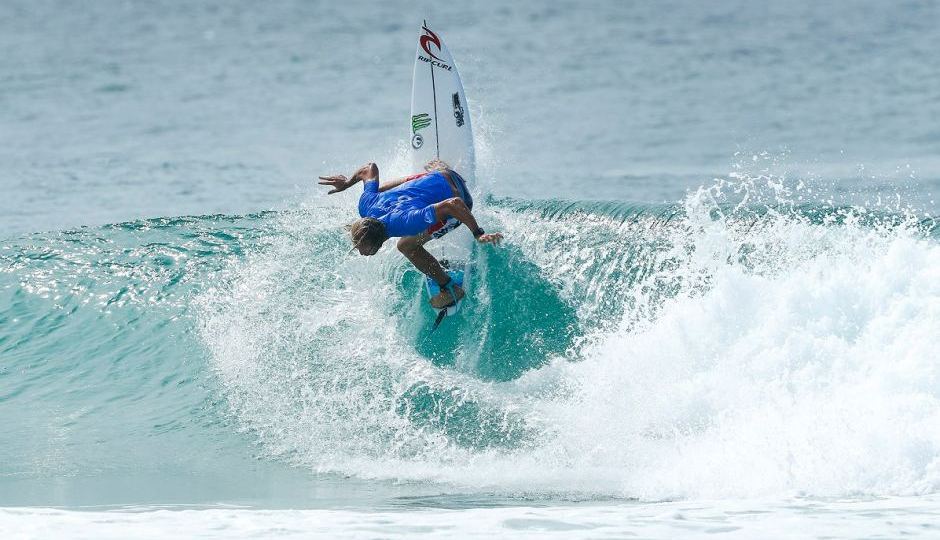 Wright won the final over good mate Matt Wilkinson and said he employed “dad strength” to get him through the three heats he was required to surf.

“I couldn’t have done it without all the support of my friends, family, partner and my little baby boy. That dad strength just came from nowhere,” an emotional Wright said straight after the win, which he dedicated to partner Kita Alexander and son Vali.

“Love and support is why I am standing here. There’s been such a beautiful energy coming my way throughout this whole event and I’d like to thank everyone who has texted me, written to me, called me and just been there for me the whole time. It definitely pulled me through what was a really tough year.”

Wright suffered a serious fall at Hawaii’s Banzai Pipeline in 2015 and through the full extent of the injury has never been revealed, he was required to spend 2016 consulting specialists and recuperating.

It was not until earlier this year that Wright indicated he was back in competitive shape again and was promptly awarded a wildcard for the 2017 World Surf League season.

He said the road to recovery had been tough.

“I had to confront every fear just to get back here,” Wright said.

“There were a lot of fears to push through to get back into the sport that pretty much took me out and could’ve taken me out forever. And to have that final with one of my best mates — I’m just over the moon.”

Wilkinson said he had been equally as moved by Wright’s return from injury but joked it was all business out in the water throughout the final.

“I obviously wanted to win but I couldn’t have asked for a better person to beat me,” Wilkinson said.

“For him to be in this event was one of the most amazing things I’ve ever seen. Watching him go through everything he did was the hardest thing I’ve ever seen and to come back and do this is pretty incredible.

“I love him and he’s been one of my best mates for so long, I think I was probably competing against a bit more than the ocean out there.”

Earlier, fellow Aussie Stephanie Gilmore served notice she is set on a seventh world title, after winning the women’s final.

The win is the 25th of Gilmore’s professional career and the sixth time the 29-year-old has won the event, her first coming during her maiden year on tour in 2010.

She said it had been a long road back to good form after a lacklustre 2016 in which she battled injury, but that she was thrilled to win again at her home break.

“It feels so good that I can’t believe it,” Gilmore said moments after the win.

“I’m so happy to have all the support, there’s no better feeling than winning here.”

Gilmore earlier defeated fellow Australian Sally Fitzgibbons and said while a world title was a long way off, winning at Snapper Rocks augured well for her.

“The stats are pretty good when you win here, we’ll see what happens but I would love to win another title.”

The former world champion said she had put a lot of hard work into her return from injury and had a renewed focus on re-establishing herself as one of the world’s best.

“Just getting to win an event again is really cool,” Gilmore said.

“There’s no more mistakes, you can’t make heats anymore by just lucking through. You really have put in that time and extra effort, all of the girls are just shredding.”