The secret history of women in surf lifesaving

They’re part of our summer landscape, an Australian institution, and the embodiment of everything we revere in our beach culture.

Australia’s surf lifesavers have been a ubiquitous feature of our summers for generations, but the stereotypical bronzed Aussie male in Speedos and skullcap has given way to a more inclusive representation of both men and women in recent decades.

While female surf lifesavers are on the rise, and are even in the majority on some beaches, their place alongside the men has a long and rich history dating back to the movement’s origins at the start of the last century – a history that was for many years hidden from the public.

Holidaymakers venturing into the waters at beaches in Tasmania and the Northern Territory will mostly be counting on female lifeguards to keep them safe.

While Australians might still expect to be rescued by a muscle-clad male, that likelihood has rapidly diminished since 1980 when Australian surf lifesaving clubs belatedly opened their doors to women members. 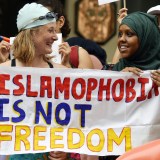 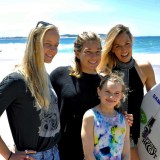 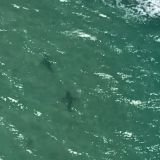 Beach closed after dozens of sharks spotted on Vic coast

According to Surf Life Saving Australia, there were 41,860 lifesavers patrolling the country’s most popular beaches last summer and almost 40 per cent were women.

The transformation within the ranks of the lifesaving fraternity has been especially felt in Tasmania and the NT where the number of female surf patrollers overtook male volunteers for the first time this year.

In South Australia and WA, the gender gap is rapidly narrowing, with female lifeguards poised to outnumber their male colleagues if recent trends continue.

The classic national image of lifesaving as a male-dominated bastion clearly belongs to the past, even though television advertising is prone to reaffirming that bygone reality.

The secret history of women and lifesaving

But even our traditional notions of our rich lifesaving legacy might be about to change, as well.

Historians are beginning to uncover previously ignored, or suppressed, records of the involvement of women in the formation of surf lifesaving clubs in Sydney in the early 1900s.

The earliest clubs, like Bronte and Bondi, developed out of Britain’s Royal Life Saving Society, which established a branch in Sydney in 1894.

The RLSS, which still operates in many Commonwealth countries, was a charitable trust formed in 1891 to train children and adults to swim in open water.

It was also the first institution to credential experienced swimmers as lifeguards throughout the United Kingdom.

In the 1890s, women in the UK and NSW were actively encouraged to acquire water safety skills and to impart their knowledge to children.

Women throughout NSW also gained formal qualifications as lifesavers, with newspapers at the time reporting many hundreds achieving proficiency certificates in lifesaving.

The need for surf lifesavers in NSW intensified in 1903 when by-laws restricting swimming at metropolitan beaches during daylight hours were relaxed by councils.

While removing such restrictions drew thousands of Sydneysiders to the city’s foreshores in the summer months, it created a major headache for emergency service workers because most of the new beachgoers were poor swimmers.

The summer of 1904 set a record for drownings at Sydney beaches and the gravity of the problem meant that local councils were not inclined to prescribe the gender of people authorised to rescue or resuscitate beleaguered swimmers.

In November 1904, Sydney sports newspaper The Referee reported that a Mrs May Loftus of the Sydney Ladies Swimming Club passed her examination for a Bronze Medallion.

According to the paper, she was the first woman in Australia to achieve the feat, which remains a prerequisite for becoming a beach lifesaver.

Loftus’ achievement was recognised by the NSW branch of the RLSS and many other women followed in her footsteps before the national surf lifesaving body in the 1930s slapped a blanket ban on ladies vying for the award.

Loftus inspired many other Sydney women to equal her milestone before the ban took effect.

In 1910, the Wollongong Surf Life Saving Club invited its female members to present for bronze medallions and four were successful.

Sports historian Ed Jaggard argues that women actively contributed to the development of surf lifesaving in the first four decades of the last century, even though male officials often conspired to undermine their presence at clubs.

There is plenty of evidence to support Jaggard’s argument that women were much more than “domestic and decorative labour” at the blokey surf clubs.

Before 1935, women competed in annual surf carnivals in NSW, Queensland and Western Australia.

At the Evans Head club on the far north coast of NSW, it was common for women to compete against men in surf races, and according to the club’s official history they sometimes won.

“For practice, the girls frequently entered the men’s surf races, and a number of occasions were successful in gaining either first, second or third places.”

Women’s surf carnivals also flourished in Queensland in the 1920s, where teams competed for regional and state titles in rescue and resuscitation, sprinting and swimming.

The storied Mooloolaba club on the Sunshine Coast had 70 members in 1930, 11 of whom were women.

Early in the summer of 1930, the Mooloolaba women blew their competition out of the water after they won the overall team event at the Queensland surf titles.

A photo of the victorious team has adorned the surf club’s rooms ever since.

Leading the way in WA

According to many sports historians, including Jaggard and Marion Stell, Perth was probably the most dynamic centre of women’s surf lifesaving competition in the 1920s.

However, the early history of women surf lifesavers remained a mystery to many until the publication of the City of Perth Surf Club’s official history in 1988 and Stell’s 1991 watershed history of Australian sportswomen.

The main reason for the silence was that several Western Australian surf clubs had instructed official historians in the mid-1980s to document only the activities of male members before 1980.

In other words, the achievements of women surf lifesavers were censored.

However, Stell confirmed that women were an integral part of the Perth surf lifesaving fraternity throughout the 1920s and were authorised to patrol the city’s beaches.

According to the Perth Surf Club’s official history “women worked as hard and as long in the club’s interests as did the pioneer men … they were rostered on to patrols, and they competed against men in club events”.

Jaggard observes that a fictional account of women competing against men at the Perth carnivals was sketched by Katharine Susannah Prichard in parts of her 1937 novel, Intimate Strangers.

The front cover of the latest annual report of Surf Life Saving Australia is a clear expression of how one of Australia’s most respected community movements sees itself in the new millennium.

Although the traditional icon of a sun-bronzed Anglo male remains a necessary part of the lifesaving marketing, it is no longer a sufficient image for sustaining the ranks of members.

Surf lifesaving’s peak body is now making a big pitch to attract first- and second-generation Australian men to its ranks.

The lifesaving movement recognised in a milestone report in 2006 that people from Greek, Italian, Asian and Middle Eastern backgrounds were under-represented in its membership.

One of the most important programs to improve the movement’s engagement with ethnic communities was the “On the Same Wave” project launched by the former Howard government.

This program targeted Middle Eastern communities in Sydney, with the aim of improving diversity within surf lifesaving clubs.

While somewhat successful, the initiative had problems finding female Muslim lifeguards due largely to their cultural aversion to the ‘revealing’ western swimsuits.

Her design of a slightly tighter and shorter lifesaving suit in the traditional yellow-and-red colours was an immediate hit with young Muslims in Sydney.

“The burkini allowed me to participate in activities at a level I had never previously expected,” Mecca Laa Laa, a 20-year-old Muslim lifeguard in Sydney, told AP in 2009.

So as you swim between the flags this summer, acknowledge the new, inclusive frontier being forged for women’s lifesaving in Australia, and maybe take a moment to celebrate the ladies of generations past whose contribution was very nearly hidden forever.