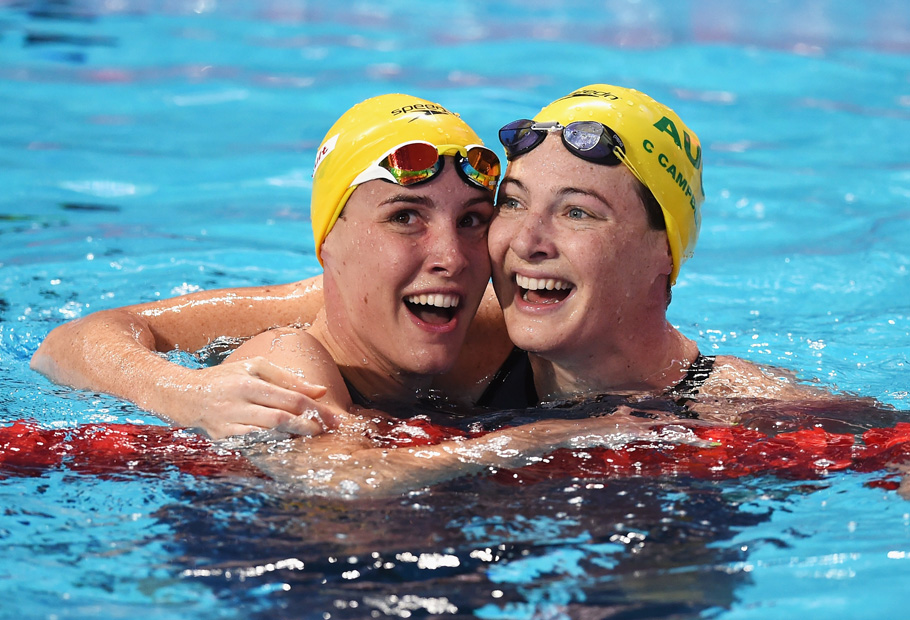 ——–
Swimming sisters Cate and Bronte Campbell helped guide Australia to success in the women’s 4x100m freestyle relay on Sunday, giving us our second gold medal at the 2016 Olympic Games. And they did it in world record time! See the full story here.

And, if you want to recap Mack Horton’s stunning men’s 400m freestyle win earlier in the day – click here.

Australian swimming’s superstar sisters Cate and Bronte Campbell don’t have to look too far for inspiration ahead of the Olympic Games in Rio.

Elder sister Cate upstaged current world champion Bronte by just two-tenths of a second in the 100 metres freestyle final at the Australian Swimming Championships on Tuesday night to make it an all-Campbell one-two finish – and not for the first time.

The sisters are used to competing against each other, and at London 2012 became the first Australian siblings in 40 years to compete at the same Olympics.

The formula will be simple in August: for one sibling to win, they will have to beat the sister swimming next to them.

But instead of a tale of sibling rivalry, the Campbells boast an enviously healthy sibling relationship – thanks in part to a little brother who can’t share the pool with them.

Cate and Bronte Campbell come from a family of five siblings. One of them – younger brother Hamish – has cerebral palsy.

In the past, the sisters have admitted that Hamish forces them to put their issues (like crushing another sister’s dream to achieve your own) in perspective.

Hamish, now 17, has the approximate development of a three-year-old and needs 24-hour care. The condition has clearly brought the family closer, with Bronte telling the paper she used to get out of bed and sing to her little brother when he was upset during the night.

The swimmer said she often thinks about Hamish behind the blocks, to remind her that it’s only a race and there are worse things in life than losing.

The sisters likely get their healthy perspective from their mother Jenny Campbell, whose pragmatic advice helped a young Bronte overcome jealousy of her elder sister’s success in the water.

As youngsters, Bronte was the harder worker in the pool and one night, a nine-year-old Cate got fed up and stole seven-year-old Bronte’s trophies and hid them under her bed.

It was then, according to the Daily Telegraph, that Jenny decided to have a gentle word to Cate.

“You know Bronte worked very hard for those,” she said.

“If you want what Bronte has you are going to have to work for it.”

With Cate now heading to her third Olympics and Bronte her second, the hard work has clearly paid off.