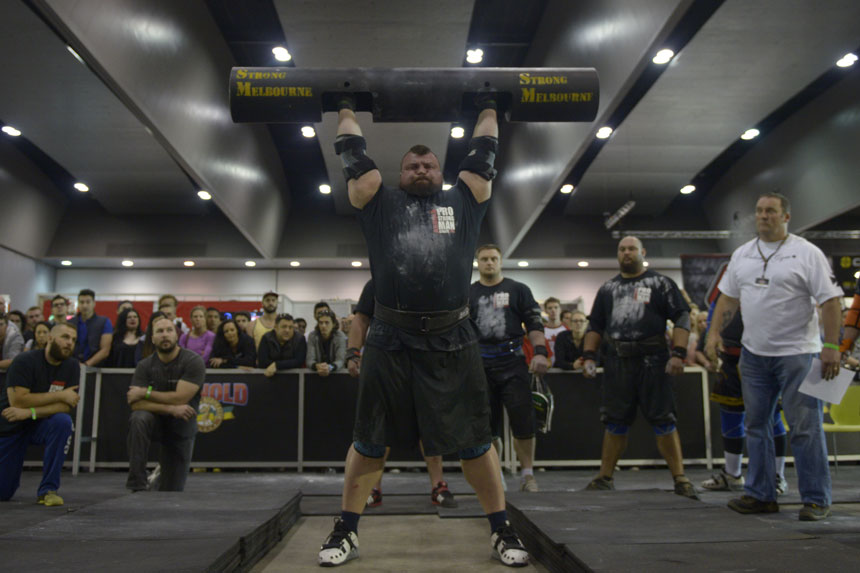 Kids, don’t try this at home.

English strongman Eddie Hall made history at Leeds Arena on Saturday when he deadlifted 500kg in an incredible show of brute force.

After the deadlift, blood vessels exploded in Hall’s head, he suffered nose bleeds and, for a moment, he passed out.

Hall’s wife and two children, who were watching on, appeared anxious but began smiling when Hall rose to his feet.

“That nearly killed me,” Hall is quoted as saying by the Yorkshire Evening Post. “The pressure on my body was surreal. I passed out after.

“I had nose bleeds. It’s not healthy doing something like that.

“But I’ve done it. I’m sure it will be in the history books for a very long time.”

Hall said he was not keen on trying his luck again, but if his record was broken, he may be tempted.

“I don’t want to do it again,” he said. “But if it comes to the point where somebody breaks it, hell … I may just do.

“And now I’m the first to deadlift half a ton. It’s history and I’m very proud to be a part of it.”

Hall, nicknamed ‘The Beast’, wants to win this year’s The World’s Strongest Man competition, which lists him as 190cm tall and 172kg.

Hall’s manager Mo Chaudry said Hall was a “true champion of the people”.

Chaudry was quoted in the Stoke Sentinel saying: “He took a seemingly impossible situation with the 500kg deadlift and made it possible.

“When I met him two years ago, he had a dream to be the world’s best and he will make everyone in Stoke-on-Trent proud.

“I know he loves meeting people and is always happy to stop for a photograph – he won’t change.”

Hall: I could ‘die trying’ to achieve my dream

In March, Hall told the BBC he was aware he may die in his quest to become the World’s Strongest Man.

He has consumed 10,000 calories a day for the last five years – four times the recommended daily allowance – and trains for five hours every day to build his strength.

Hall, who was a national swimming champion at 13, knows that he is pushing the boundaries.

“The human body isn’t designed to be this size. [But] my life revolves around World’s Strongest Man.

Due to his size, Hall has to wear an oxygen mask in bed to avert the risk of sleep apnoea, which means he could stop breathing during his sleep.