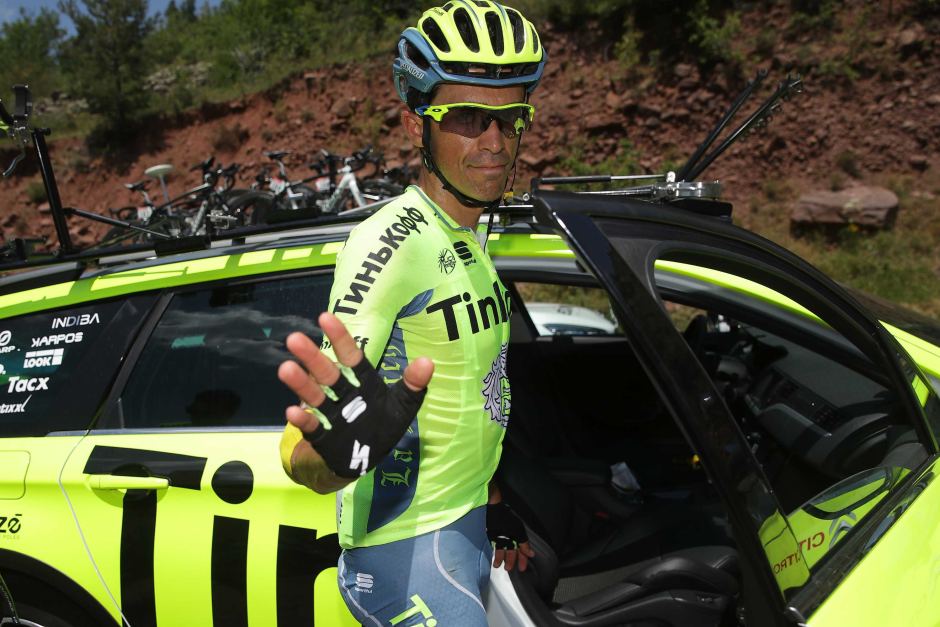 Diminished by a fever and still reeling from crashes on the opening two days of the race, two-time champion Alberto Contador has pulled out of the Tour de France during the toughest Pyrenean stage.

Slightly more than 100km from the end of Stage nine on Sunday, the 33-year-old Spaniard stopped at the side of the road, hopped off his bike and got into the passenger seat of his team car.

“I could not keep going,” Contador said.

“This morning I had a fever. And I did not feel good since I crashed on the first day.”

Contador crashed in each of the opening stages – damaging his right shoulder, elbow and hip – and had already lost time on the other overall favourites.

He was in 20th position at the end of Saturday’s eighth stage – 3 minutes, 12 seconds behind leader Chris Froome.

During Sunday’s stage, Contador dropped back to his team car four times before finally withdrawing.

He had started the stage in a bright fashion, though, attacking alongside fellow Spaniard Alejandro Valverde to catch a group of early breakaway riders on the first climb.

But Contador could not continue his effort and was quickly brought back by the pack before he pulled out in the Port del Canto climb. He then handed his bike to a mechanic and waved to TV cameras as he exited the race that made him famous.

Tom Dumoulin of the Netherlands won the ninth stage on the back of a gutsy solo breakaway, though Chris Froome remains the overall leader.

The Giant Alpecin rider, sixth in last year’s Vuelta, was the strongest of Sunday’s breakaway riders, taking a solo victory in a deafening hailstorm after riding most of the day in temperatures nearing 40 degrees Celsius.

Briton Chris Froome retained the overall leader’s yellow jersey after controlling his closest rivals in the ascent to Arcalis.

The Team Sky rider leads compatriot Adam Yates (Orica-Bike Exchange) by 16 seconds and Ireland’s Dan Martin (Etixx-Quick Step) by 19, while Australian Richie Porte gained ground on some rivals but is still more than two minutes back in 14th.