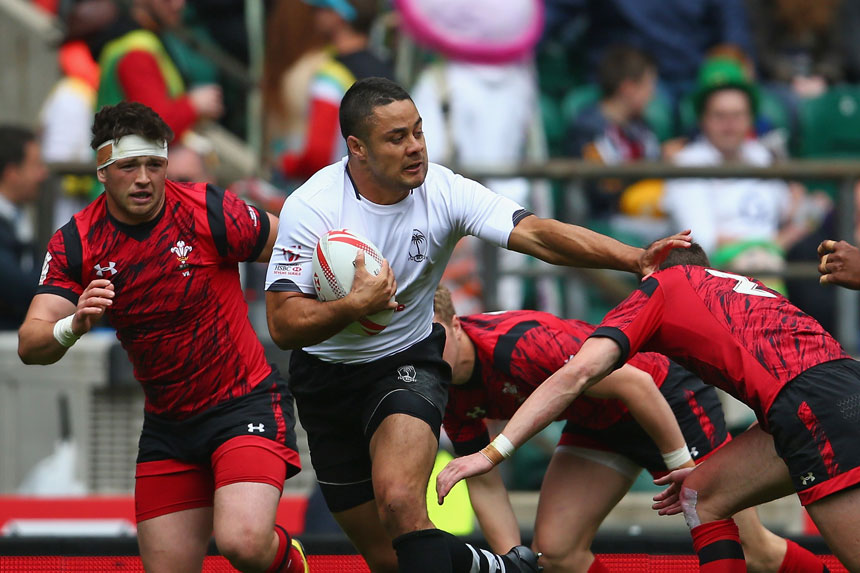 On current form, and having had barely 15 minutes of combined match time across six Sevens games at Twickenham, he will not be picked.

This is a Fijian side celebrating back-to-back Rugby Sevens World Series victories, secured with a fourth-place finish at the London tournament, which was won by Scotland who upset South Africa 27-26 with a last-gasp victory in the final.

This is also a Fijian side with six world-class players who did not even play this weekend.

Hayne is a world-class athlete himself, a two-time Dally M medal winner who transitioned into the NFL, playing played last season with the San Francisco 49ers.

But to get into Fiji’s team with less than three months until the Rio Games appears to be the most daunting sporting challenge he has ever faced.

“At the moment, I’m behind the eight ball and I’ve got no problem with that. It’s about working hard and getting there,” Hayne said.

“They’re the world champs. Sometimes in life, it’s not about success, but it’s about the experience and just being part of that team.

“[It’s the] first Fijian team to win back-to-back titles and they’ve got a bunch of superstars who are going to be a joy to train with and a joy to play with.

“It’s not about coming over and making the team, it’s about giving me an opportunity to make a team.”

Hayne now faces six weeks of intense training in Fiji to prove to coach Ben Ryan that he’s not only fit enough for Rio, but good enough to displace one of the team’s established stars.

“We had a very light week this week … when we’re running up 100-metre sand dunes, when these guys are the fittest rugby players Fiji has ever had and they’re still throwing up after sessions, his lactate’s going to be going into overdrive.

“Whether he’ll be able to tolerate that in a short timeframe is a serious question.”

Hayne had a huge amount to do to compete, Ryan said.

Fiji finished clear of South Africa to win the Sevens World Series for a second year running, having made the semi-finals in all but one tournament this season.

Ryan’s team finished fourth at Twickenham, losing 26-19 in the third-place playoff against USA.