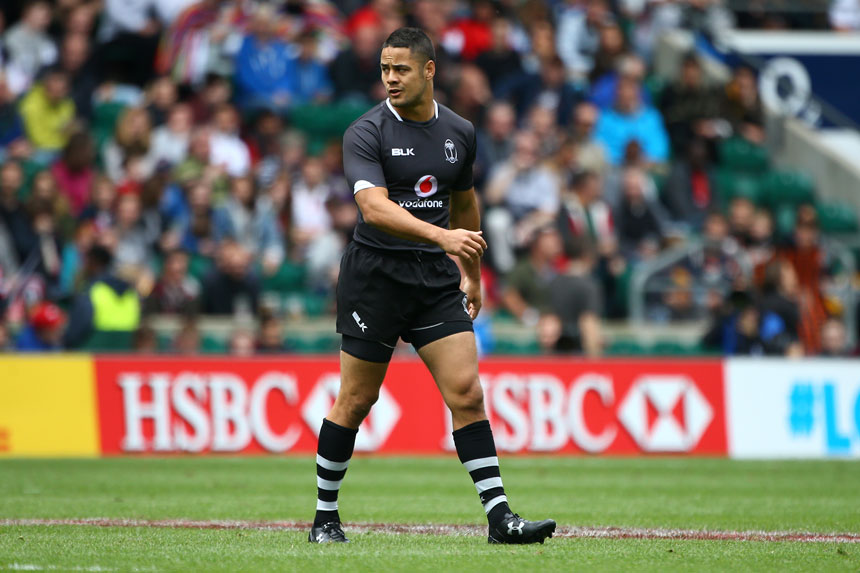 One of the most talked about athletes in Australian sport set tongues wagging again when, last week, he announced his retirement from the NFL and his intention to represent Fiji in Rugby Sevens at the 2016 Olympic Games.

In making his decision, Hayne said “the Olympics has been something I have admired since I was a little boy” but Fiji’s Sevens coach Ben Ryan refused to promise he’d pick him.

In fact, he said he’d have an almighty battle on his hands just to get on the plane to Brazil.

And that’s a battle that Hayne looks like he’s losing, just a week in.

Fiji, who secured back-to-back Rugby Sevens World Series victories with a fourth-placed finish at the season finale in London on the weekend, left out six world-class players.

That gave Hayne a chance to show his wares, but he played barely 15 minutes of combined match time across six matches at Twickenham.

Apart from one ankle-tap that saved a try, he struggled to exert any influence, particularly against Australia, who he has previously represented in rugby league.

Hayne was penalised twice after coming on in the final minute, before a knock-on of his ended the match.

Tellingly, the two penalties he conceded were due to a lack of knowledge of breakdown procedures.

“At the moment, I’m behind the eightball,” Hayne acknowledged.

“And I’ve got no problem with that. It’s about working hard and getting there.

“They’re the world champs. Sometimes in life, it’s not about success, but it’s about the experience and just being part of that team.”

Hayne added that his dream was not all about playing at the Olympics, but rather the journey to get there.

“It’s not about coming over and making the team,” he said.

“It’s about giving me an opportunity to make a team.”

Ahead of Hayne is a six-week training camp in Fiji – from which their coach Ryan said he would pick his 12-man Olympic squad.

At the camp, 24 Fiji players are expected. Ryan, who says Hayne won’t get any special treatment, referenced popular talent show The X-Factor when revealing how he would run the camp, with players set to be eliminated throughout.

‘This isn’t just a random side’

Ryan was quick to emphasise just how difficult Hayne’s bid to win a spot in his side would be.

And his queries about Hayne’s fitness levels implied that he would not be selected for the Rio Olympics.

“We had a very light week this week … when we’re running up 100-metre sand dunes, when these guys are the fittest rugby players Fiji has ever had and they’re still throwing up after sessions.

“His [Hayne’s] lactate’s going to be going into overdrive.

“Whether he’ll be able to tolerate that in a short time frame is a serious question.”

Ryan then pondered whether Hayne had enough skill to make his team.

“This isn’t just a random side,” he added.

“This is the best side in the world in the last two years.