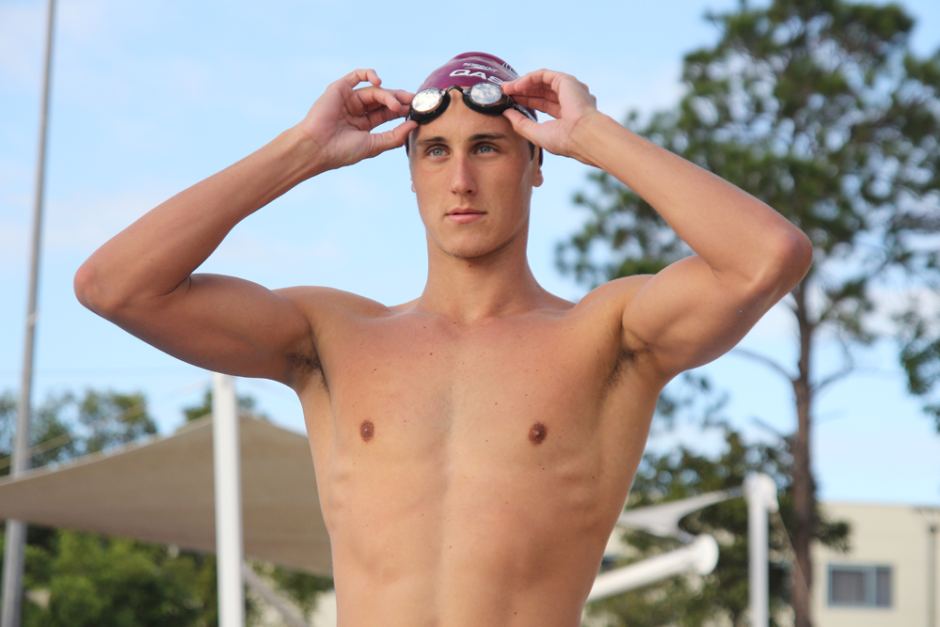 In Cameron McEvoy’s world, concepts like talent and luck are dangerous distractions.

His is a scientific mindset, where meticulous attention to detail and hard work have made him what he is today.

“I think it’s dangerous to tell young kids there’s such a thing as talent,” he said.

“[That] if you don’t possess this straight away then you’re not going to be good.”

• New Commonwealth record for Rio-bound McEvoy
• Australian swimming has ‘got its mojo back’: coach
• Campbell sisters inspired by disabled brother

McEvoy has firmly planted a target on his own back in the past few months, smashing personal bests and setting records.

But the 21-year-old also has interest in a parallel universe, another world of constant possibilities.

“I just want to spend my life learning as much as I can about the weird stuff that happens in the universe,” he said.

McEvoy’s undergraduate studies in physics and applied mathematics at Griffith University are never far from his mind, especially during those long training sessions.

He even uses it as a way to reduce pressure at big meets – imagining what aliens might think looking from space.

“What they see is a bunch of these fully grown humans getting up on a block that’s right next to a hole in the ground filled with water,” he said.

“They dive in and they swim as fast as they can up, and then they just come right back and that’s it.

“They would think it’s just the weirdest thing they’ve ever seen.”

McEvoy was hugely excited by the discovery of gravitational waves this year.

A lifetime of work on his own body and technique is a testament to his analytical approach.

“A lot of the time my stroke felt really wonky in the water and then I’d fix one part and then the other one would go wonky.

“It felt all over the place for a long period of time and even now I have some days when I feel really bad in the water.”

“I always remember this young fellow getting around on toes, on his tiptoes,” Scarce said.

“That’s how he walked back then.”

In fact that childhood habit of tiptoeing through the world left McEvoy with shortened calf muscles.

It was a quirk he worked on in the gym, where he has also built up his relatively slight frame.

Scarce has known McEvoy since he was six years old.

“He was always determined, you could see him mulling, thinking things over in his head,” he said.

“He wasn’t the biggest kid but he just moved so well in the water,” he said.

“He just had great finesse in the water, just looked athletic, like Usain Bolt does on the track.”

Scarce’s amiable style works well with his analytical charge, or maybe it is the animal analogies that do the trick.

“He’s very strong, like a tuna fish … the big sharks, marlin, they’re gone like a vapour trail,” he said.

“You know if you pat him on chest or back and say ‘well done’ … you can feel the energy.”

McEvoy wants his story to show kids that innate ability is not everything.

“I just think there’s a big trap where a lot of people explain to younger kids you’ve got to have a nice feel for the water to be successful,” he said.

“I think we should be teaching them that everything is something you can develop and work on.”

McEvoy has a long list of passions in the modern physics. In the swim team McEvoy is known as ‘The Professor’ but on land he is aiming for more than the nickname.

McEvoy’s physics professor Erik Streed admits he does not know much about what he dubs ‘Cam world’.

“I’m a bit embarrassed to say,” he said.

“I see that he’s in the newspaper from time to time but I try not to pay attention to it because I’m his physics teacher.”

“That combination, it’s really quite extraordinary.”

There is little doubt Australian swimming needed a spearhead like Cam McEvoy.

He is a world-beater in the pool and a compelling role model out of it.

But it has been quite a journey since London.

It was the trip of a lifetime for the 17 year old, back then a junior member of the prestigious Australian relay team.

But he also was part of that team’s notorious sleeping tablet scandal.

“It wasn’t a smart thing to do back then,” McEvoy said.

“In hindsight I learnt a lot from it and I was able to directly apply everything I learnt when I got back.

“In the year between London and the world championships the following year I was a different person.”

He became a person who could even change the image of science and at least one man sat up and took note.

Swinburne Centre for Astrophysics and Supercomputing director Professor Matthew Bailes has invited McEvoy to be an advisory board member in his proposed new Centre of Excellence for Gravitational Wave Discovery.

The move is aimed at inspiring the next generation of scientists and engineers and McEvoy is the perfect recruit.

“If you Google scientists you probably come up with Einstein with crazy hair or Stephen Hawking in a wheelchair, and then you’ve got Cam,” Professor Bailes said.

“[He’s] like this elite athlete and good looking young man.”

“Wouldn’t it be fantastic if Cam could not only be an ambassador for our science but also we’d be able to tap into his brain if you like and say what are we doing and is it working for kids,” he said.

As for McEvoy, it has been his goal to express his duel passions for science and sport since he first came to the public attention when he made the Australian swim team.

Now he wants to inspire others to follow their dreams.

“The message first and foremost is you don’t have to be pigeonholed into some small area of life,” he said.

“You can go along and do many things if you’re passionate about it.”