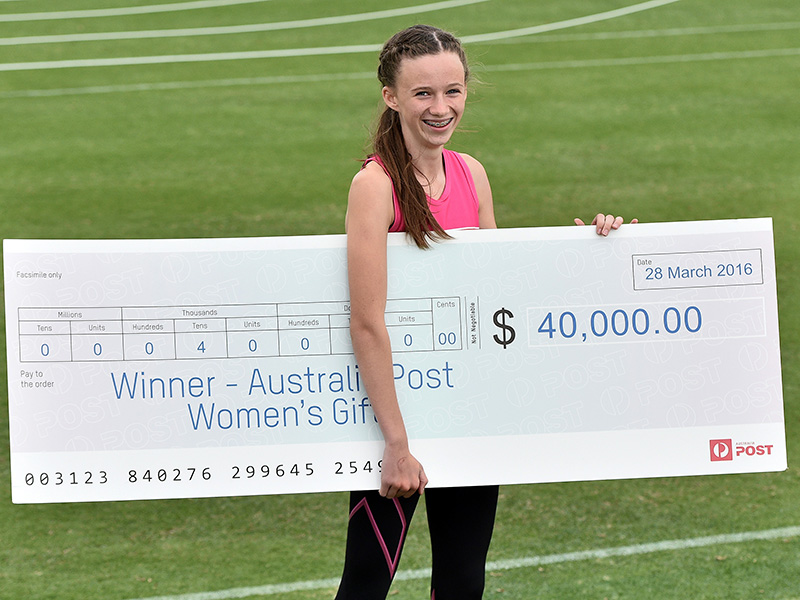 It should have been a fairytale story – a 15-year-old winning the women’s edition of the Stawell Gift, Australia’s richest foot race.

But Talia Martin’s triumph on Monday, and subsequent $40,000 paycheque, has the athletics world up in arms.

Part of the 120-metre race’s magic is the fact participants start in different spots, thanks to a handicap system determined by previous results.

• Why March form just doesn’t matter in the NRL
• Rafael Nadal’s fears for the future of tennis
• Campbell Brown: you’d be a fool to write off Hawthorn

Martin ran with a 13-metre handicap advantage on Easter Monday, thanks to her sluggish showing at an Ararat meeting earlier this month and the presence of 100m national record holder Melissa Breen.

She drastically improved by seven metres in Stawell, edging out Tierra Exum (9.75m handicap), the sister of basketballer Dante Exum, to claim victory in a bob-of-the-head finish.

“We have a tolerance of somewhere between zero and four metres (for improvement), generally, so for Talia to improve up to about seven metres is certainly in the extreme range,” he told The New Daily.

Burbidge admitted stewards were surprised on Saturday when Martin stormed out to win her heat in 13.697 seconds.

“If we go back to 12 days prior, I don’t believe she made it past her heat at Ararat,” he added.

“So to come out and put the fastest time on the board at the Stawell Gift is certainly something that rang alarm bells for us.”

The 15-year-old winner was fined $2000 for ‘inconsistent performance’ before Martin’s team appealed the severity – but not the sanction. Her fine was later reduced to $500, on the proviso that she would lose the first $1500 of any winnings from the main race.

‘You cannot have someone come from the clouds’

“You cannot run 14.5 (seconds) consistently all year – not just Ararat – then come to the Stawell Gift and run 13.7 and expect to get away with it and everyone to say that is fine,” he is quoted as saying in The Age.

“This has all the hallmarks of a 1960s Stawell Gift sting.

“This is what pro running has been about – beating the handicapper. But I think we have progressed past that.

“The sponsor is paying $40,000 for first prize … you cannot have someone come from the clouds and run seven metres quicker than she has been handicapped on.”

Victorian Athletics League chief steward Brian Marantelli did not mince his words either.

“It definitely (damages the credibility of the race),” he said.

“It’s like in the horse racing game, getting beaten in a maiden at Pakenham and 12 days later winning the Cox Plate.”

He added to the ABC: “Her seven-metre improvement is more than what most people can improve in a lifetime and she’s done it in 12 days.”

Burbidge said no avenues of appeal were being explored by second-placed Exum.

Athletics Victoria told The New Daily it would not get involved in the issue.

A spokesperson said: “The rules and regulations regarding the running of the Stawell Gift and professional running is for the Victorian Athletics League to administer, along with how the athletes and coaches operate under these guidelines.”

Martin’s coach, Peter O’Dwyer, said the death of the teenager’s aunt in the build-up to the Ararat Gift affected her performance.

“Her aunty died that week and she came and she let the grief impact her performance,” he said.

“We wanted her to refocus for this weekend, so we did a lot of work over the last two weeks and she came up.”

Martin made reference to her aunt’s death following her victory.

“At the Ararat Gift, I didn’t run my best time when my Aunty Barb died. I was really emotional,” she said.

“My aunty Barb always came down to Stawell so it’s been really hard without her but she was watching me up in heaven and she would be proud.” The Stawell Gift win compared to ‘an old-fashioned sting’