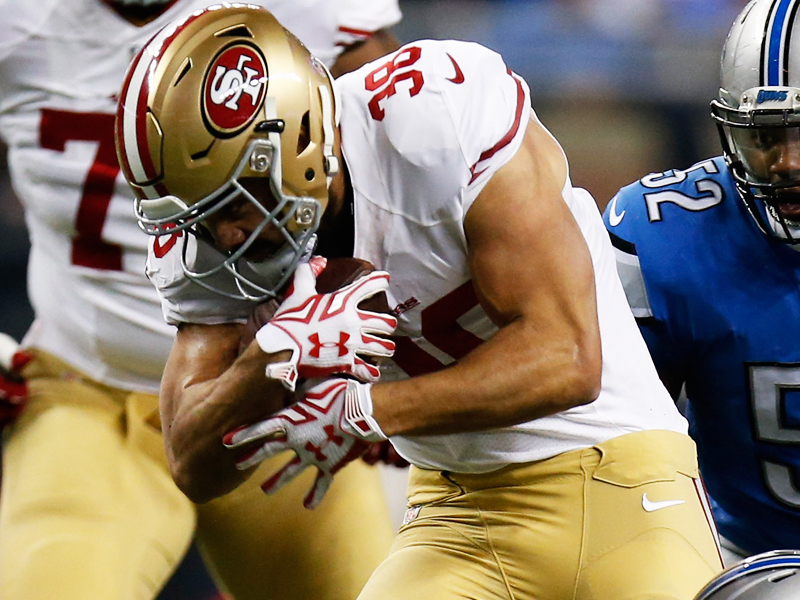 The Hayne Plane looked to have crashed and burned in early November.

The news the 27-year-old former NRL star had been demoted to the San Francisco 49ers’ practice squad had many naysayers declaring his dream of becoming an NFL star was over.

But after two months of howls of protest and head-scratching from fans and commentators, the former rugby league star has been thrown an NFL lifeline.

Hayne returned for the 49ers second-last game for the season, impressing early.

He started powerfully at the position of running back on Monday morning (AEDT), his first two carries earning 15 yards and helping the San Francisco 49ers to an early touchdown.

The former Australian rugby league star made the most of his early opportunities in Detroit and gave the 49ers the offensive punch they’ve been craving.

After Hayne’s bullocking runs, the 49ers were in striking distance of a touchdown, and little more than five minutes into the first quarter quarterback Blaine Gabbert connected with tight end Vance McDonald for the touchdown and a 7-0 lead.

But he and his side waned. Hayne managed only 27 yards on nine carries and 20 yards on five receptions for the match. The 49ers lost 32-17, failing to score in the second half.

“I thought he represented himself well,” coach Jim Tomsula said during the post-match press conference.

It was the new running back tandem of Hayne and DuJuan Harris combining with an improved offensive line that created gaps for them that helped the 49ers to their impressive first half, before it fell apart in the second.

Why was he brought back?

While earlier in the season Hayne was favoured by the 49ers as a punt returner, they need a healthy running back this week to back up Kendall Gaskins and DuJuan Harris.

NFL teams have 53 players on their active roster. Only 46 can play in games. Hayne made it onto this list of 46.

He was stuck on the 49ers practice squad, similar to an AFL club’s rookie list, since November 2. Practice squad members can’t play games, but train with the 53-man roster during the week, often used to simulate the team’s next opponent.

Is he back for good?

If Hayne’s showing did not impress, he could find himself waived and back on the practice squad. Injured 49er running back Mike Davis is eligible to return for next week’s final game against St Louis.

But if experts rate performance contributions highly, it could give more weight to the calls for the sacking of general manager Trent Baalke, coach Jim Tomsula, offensive co-ordinator Geep Chryst and McGaughey. They’ve made many odd decisions during the 49ers’ 10 loss, four win season.

If Hayne stays on the active roster for next week’s final game against St Louis the 49ers will control his rights. If not, he’ll have more say where he can play.

Jarryd Hayne returns to the NFL with a vengeance