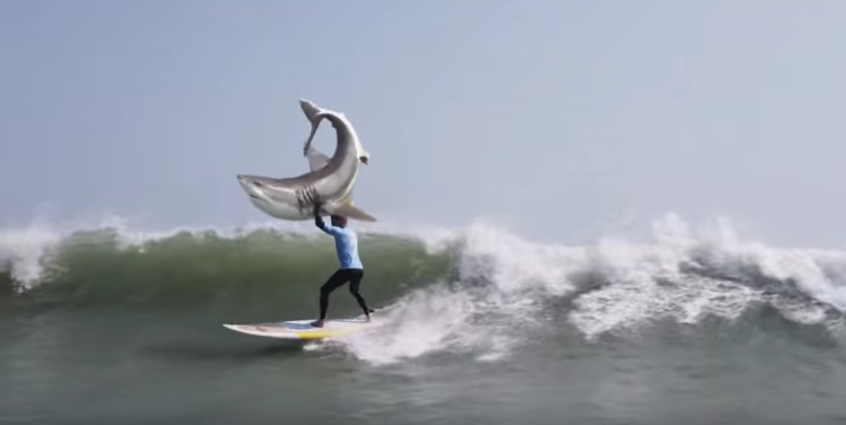 Mick Fanning may not be ready to laugh about fighting off a shark at the J-Bay Open earlier this year, but KFC is.

The South African advertisement parodied the frightening incident with a Fanning lookalike grappling with a shark in the water, before lifting it up, catching a wave and surfing with the shark triumphantly above his head.

The moment is described as “next level awesome” by commentators in the ad, before the plug for the new “Double Jacked Up Crunch” burger pops up.

Mick Fanning made world headlines when a shark attacked him at the J-Bay Open in South Africa in July this year.

Terrifying video footage captured of the moment he fought off the great white led viewers to agree Fanning was fortunate to survive, especially unscathed.

Fanning’s mother told Fairfax the ad had upset both herself and the champion surfer.

“I think it is very disrespectful,” she said. “They’ve put a lookalike in the video. It really brings back a lot of trauma for everybody who has been attacked by a shark.

“Some families have had fatalities and some people are still absolutely scarred without limbs. It’s disrespectful to them and Mick is not at all happy with that.”

Ms Fanning said the World Surf League had also taken a negative view of the parody, and was planning legal action to get it off the air.

KFC Australia was careful to separate itself from the South African arm, saying in a statement that it was sensitive to the situation and would never consider playing such an ad here.

Fanning, who is back in the water after the horrifying ordeal, will compete in the Moche Rip Curl Pro Portugal on Tuesday.

Watch the advertisement below