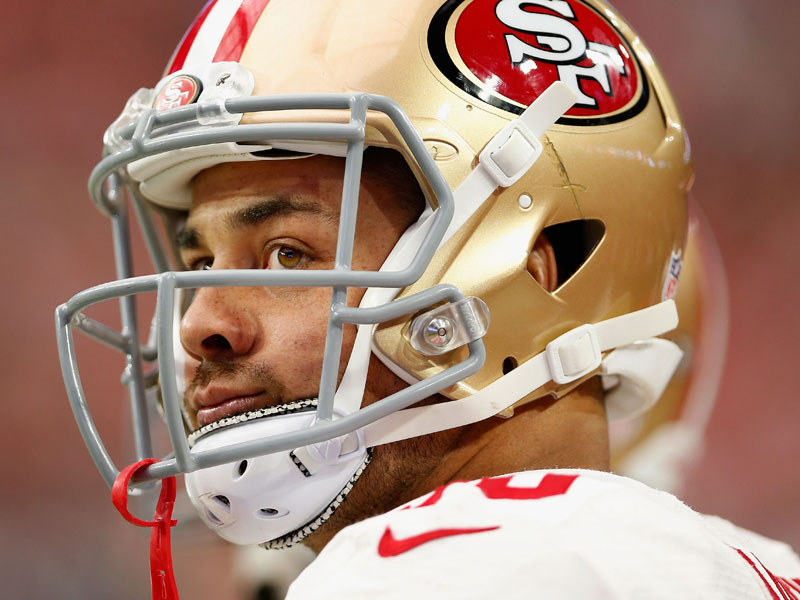 Jarryd Hayne was stopped just short of a first touchdown and the San Francisco 49ers came agonisingly close to a badly-needed NFL victory against the New York Giants.

The 49ers led 27-23 with 21 seconds left in Sunday’s game and appeared set to break their three-game losing streak.

• The 10 greatest finishes in sporting history
• New twist on knee injuries
• ‘Paranoid’ Cousins was a threat to Eagles’ mission: Judd

Giants quarterback Eli Manning led his team to the match-winning touchdown on an eight-play, 82-yard drive capped off with a pinpoint pass to tight end Larry Donnell in the end zone.

“Hats off to Eli Manning and the Giants.”

The 49ers were in trouble early and still trailed the Giants 13-6 in the third quarter when Hayne was brought in to play running back after veteran Reggie Bush aggravated a calf injury.

Hayne smashed through two defenders for an eight-yard run before being wrestled to the ground by two other defenders four yards short of the end zone.

The 49ers went to Hayne on the next play but he could only manage one yard.

The next play 49ers quarterback Colin Kaepernick threw a short pass to wide-receiver Anquan Boldin who scored to lock the teams up 13-13.

Hayne caught the ball over his left shoulder near the sideline and then went on another powerful run, with the help of blockers avoiding three defenders, before being tackled for a 16-yard return.

The 49ers appeared set for an upset win at the Giants’ Met-Life Stadium when running back Carlos Hyde scored with 1:45 left to give his team a 27-23 lead.

But Manning then took control and broke the 49ers when he found Donnell for the game winner.

“Eli put it up there and I went and got it,” Donnell said.

The 49ers, who fall to a 1-4 win-loss record, have a good chance to score a victory next week when they host another 1-4 team, the Baltimore Ravens, at their Santa Clara, California, stadium.

Hayne just yards away from touchdown for 49ers