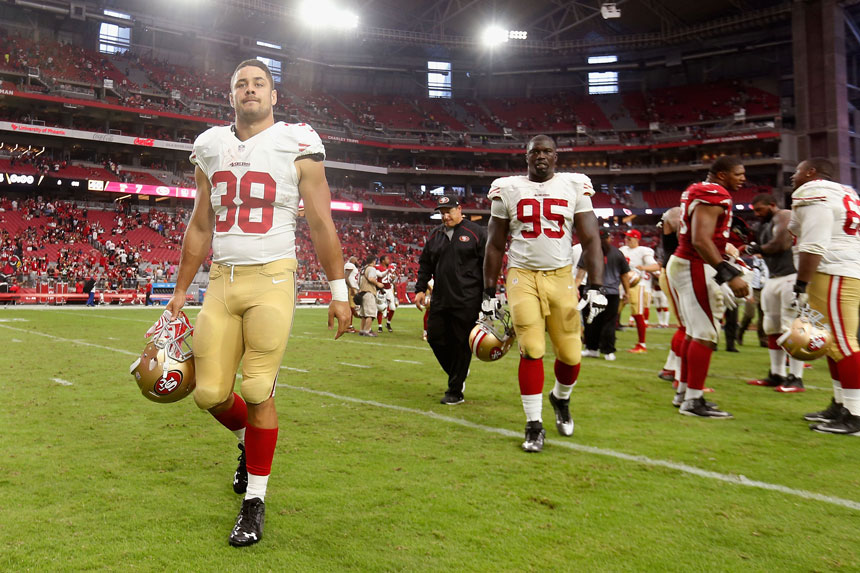 Jarryd Hayne produced a rare highlight for the San Francisco 49ers as they struggled to a sorry loss against the Arizona Cardinals.

The Cardinals cruised to a 47-7 win over an inferior 49ers outfit, but Hayne was at the centre of his team’s only touchdown of the match on Monday morning.

Hayne burst through on the right flank in a 37-yard punt return, powering through the Cardinals’ big men in his best passage of play since making the switch to the NFL.

• Popularity for the ‘Hayne Plane’ soaring in the NFL
• The moment Australians owned the NFL
• Hayne’s NFL transition is ‘amazing’: Kaepernick

That gain allowed quarter-back Colin Kaepernick to score a touchdown for the Niners, running the ball in 12 yards to get San Francisco on the board.

FACT: Jarryd Hayne is NOT a fun man to tackle 37-yard return with a truck stick to boot. #HaynePlane #SFvsAZ http://t.co/CVVBERSYM2

Kaepernick had an otherwise disastrous game in Arizona, throwing four interceptions that punished the 49ers and led to the heavy loss.

The only bright spot for Kaepernick was set up by Hayne.

With the 49ers down 28-0 late in the second quarter, Cardinals punter Drew Butler booted the ball downfield to where the former NRL star was waiting.

The punt was shorter than expected so Hayne was in full flight when he ran forward to catch it and with an open field in front of him he veered to his right.

49ers blockers in the special teams unit did their job, carving a path for Hayne who sped past two defenders before being shepherded to the sideline.

The 37-yard return had team-mates on the sideline, with nothing up until that point to cheer for, on their feet and congratulating Hayne with slaps on the back and helmet.

Two plays later, with the 49ers near the end zone thanks to Hayne’s run, Kaepernick sprinted for their first and only touchdown.

Just before the game the 49ers announced running back Reggie Bush and punt-returner Bruce Ellington were out with injuries, heightening expectations Hayne would have more time on the field.

However, with Kaepernick repeatedly throwing the ball away – two in the first six minutes which led to Cardinals touchdowns – there were few opportunities at running back.

49ers’ chief running back Carlos Hyde had 15 carries for 51 yards while Mike Davis was the second choice ahead of Hayne.

Davis, who was ineffective against the Pittsburgh Steelers in last week’s lopsided loss, again was easily chopped down and had just six yards from seven carries.

Hayne came on the field as a running back in the second quarter, but did not carry the ball.

His role was punt-returner, while DeAndrew White was the kick-returner.

The 49ers return to their home field, Levi’s Stadium, next week but the Green Bay Packers will again be formidable opponents.

Hayne catches the eye but 49ers get thrashed again