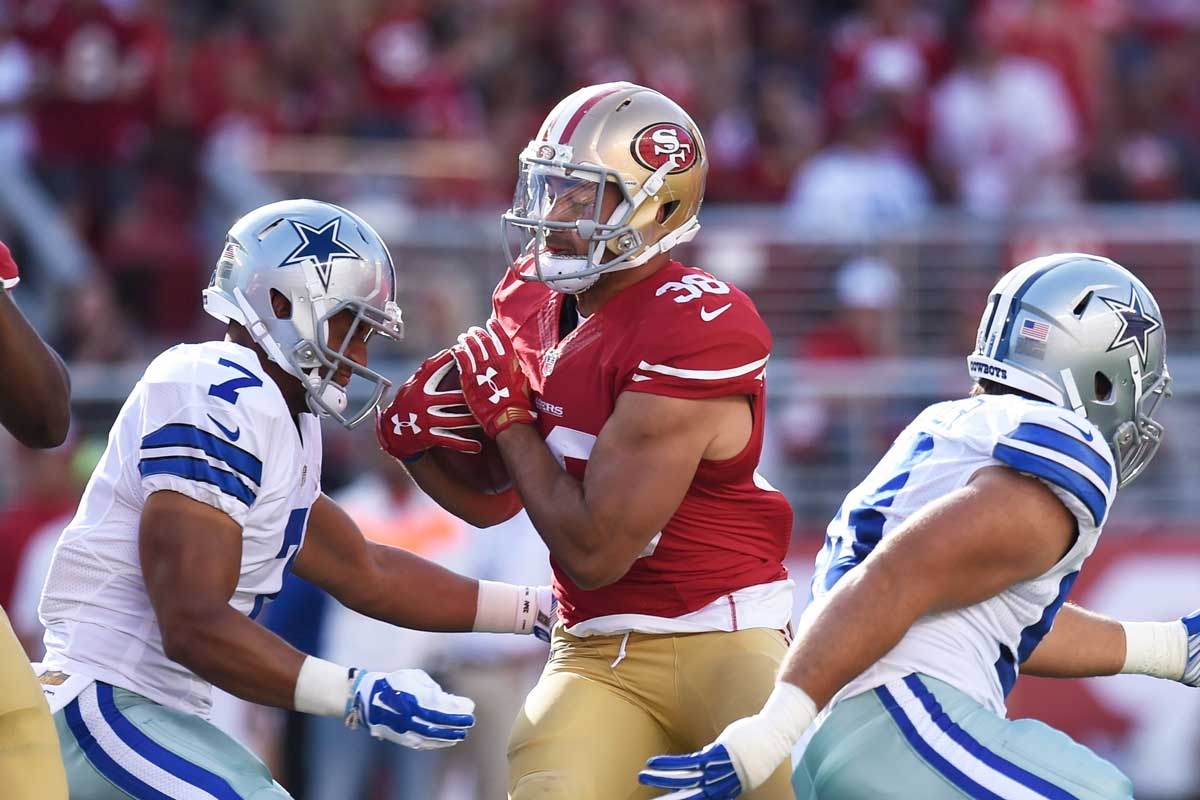 Given those showings, it’s expected Hayne will win a permanent spot on the 49ers’ roster for the 2015-16 NFL season.

That contract would see him earn $A2.2 million over three years – but there’s a lot more he’ll take to the bank.

His NFL salary is a fraction of his reported earning potential for a stint in the US. For example, a sports management expert told The New Daily that Hayne could become one of Australia’s most marketable sportsmen.

He said making the NFL as an Australian outfield player is “man-going-to-the-moon stuff”.

“The tennis players and the cricketers are on the nose at the moment,” sports management expert from University of Technology Sydney, Professor Daryl Adair, told The New Daily.

“The timing is perfect for him. Bogut and Dellavedova did well last season but right now [Hayne in the NFL] is like man-going-to-the-moon stuff.

“There is a tremendous novelty factor [for brands and the public] surrounding an Australian NFL player who is not a punter.

“Our punters weren’t household names, Hayne is. This is out of this world.”

“Imagine if that happened? That’d be pandemonium,” he said.

“You’ll see people in Australia walking around with Jarryd Hayne NFL paraphernalia and that’s never been done here for an NFL outfield player.”

There have also been claims Nike is preparing to mass produce Hayne’s No.38 San Francisco jersey.

A local 49ers club store representative told Fairfax he’d never seen demand for a jersey like this before. He predicted t-shirts, mugs, badges and other merchandise will follow. Players’ management negotiate cuts of such sales.

It has been reported Channel 7 is trying to negotiate a deal with the NFL to screen all 49ers games live into Australia. A single player-fuelled deal like that is unprecedented in Australian sport.

A San Francisco sports marketer told The Australian Hayne could easily earn around $A4 million in endorsements during a reported three-year stint in the NFL.

“Certainly I think Jarryd Hayne could make up to $US3 million ($A4 million) annually,” Bob Dorfman told the newspaper.

“After that performance against the Cowboys – wow. I definitely think he is going to make the final roster.

“I also have no doubt America will fall in love with him. With his story.”

He said Australian brands in America like Qantas, Outback Steakhouse and Foster’s could use Hayne’s fame to get noticed in the US.

Compared to the other stars

He does have some big salaries and endorsement deals to match though. For example, in 2015 Australian golfer Adam Scott made $A15.5 million – mostly from sponsorship deals including Japanese giant Uniqlo.

The highest endorsement earner in the NFL is legendary quarterback Peyton Manning. He earns $A12 million in one year.

NFL players earn much less than those in the NBA or MLB when it comes to endorsements.

However, given the uniqueness and groundbreaking fashion on Hayne’s achievements, there might be no precedent for how marketable he could become.