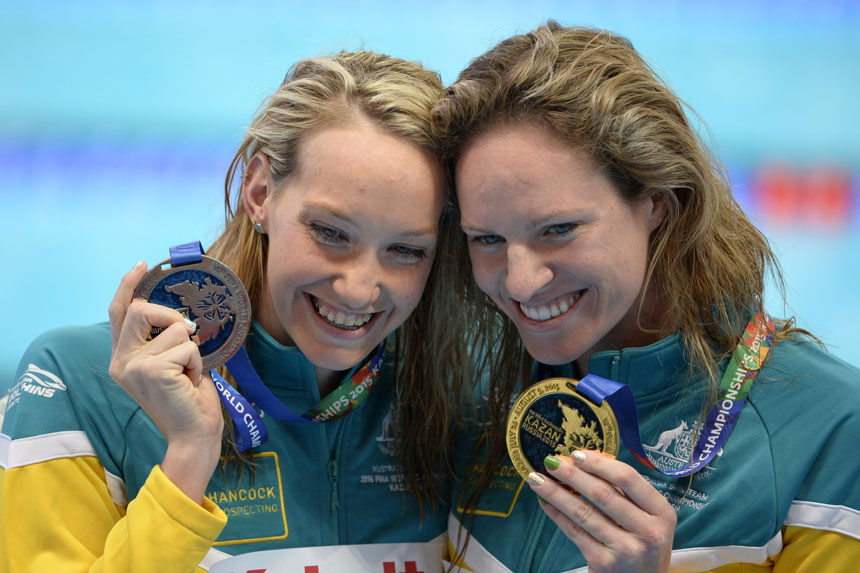 Eight years after her debut, Emily Seebohm has finally sealed individual gold after a stunning 100m backstroke triumph on day three of the world swimming championships in Russia.

And Australia did not have to wait long for another gold in Kazan on Tuesday night, after Mitch Larkin completed the 100m backstroke double with his own impressive victory.

Since her international debut in 2007, Seebohm had never won individual gold at a world titles or Olympics.

But at her fifth world titles, Seebohm, 23, finally ditched her bridesmaid status on the big stage as team-mate Madison Wilson joined the party with a stunning 100m backstroke silver.

Seebohm had little expectations ahead of the meet after her coach Matt Brown left weeks following the trials and she dislocated her knee in a freak horse riding accident in May.

But her relaxed approach finally proved a winning formula.

“This doesn’t feel real. It’s taken me five times to get here and I finally did,” Seebohm said.

“It’s the best feeling I have experienced. I won’t be sleeping tonight.

Seebohm (58.26 seconds) clocked a time that would have also claimed gold at the 2013 worlds and London Olympics.

Those titles were won by Missy Franklin but Seebohm’s American nemesis had no answer on Tuesday night, finishing a distant fifth after a poor start.

The closest Seebohm had previously gotten to upstaging her great US rival was at London.

She broke the Games record in the heats, only to again be relegated to silver.

A tearful Seebohm later blamed her meltdown on a social media fixation.

“I know I didn’t have the best preparation … but I have worked hard on dealing with pressure,” Seebohm said.

“That’s what I forgot to do in London, not take it too seriously and enjoy every moment.

Seebohm had also chimed into Australia’s winning 4x100m freestyle team win on day one in Kazan – remarkably her first world titles gold since her 2007 debut.

Grevers was relegated to bronze and France’s Camille Lacourt silver.

Larkin became just the third person in history to own both the short and long course world 100m backstroke titles.

“It’s amazing, I want to do it again,” Larkin said.

“This is the moment that you dream of.”

Larkin had been so dominant at Kazan that he admitted he felt more relieved to have matched the hype with gold.

“A little bit, I had led from the heats and had been swimming good times,” he said.

“But if I had finished second or third I would have been just as happy.”

Not so happy was Australia’s highly fancied Cameron McEvoy who bombed in the 200m freestyle final, finishing last behind winner James Guy of Britain.