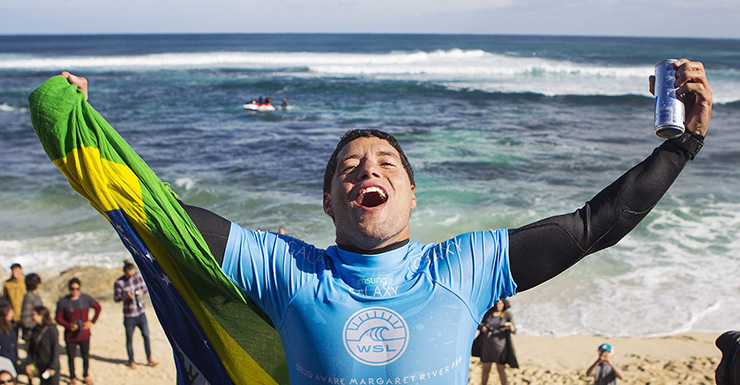 Brazilian Adriano de Souza has cemented his position at the top of the world rankings with victory in the Margaret River Pro on Friday.

De Souza had taken over the world number one spot once Filipe Toledo and Mick Fanning suffered early eliminations in the Margaret River event.

But a win over talented Hawaiian John John Florence in the final further showcased de Souza’s credentials for the 2015 world title.

He put Florence under pressure early in the final posting an 8.93 score out of 10. Florence threatened to take the lead with some dynamic rides but failed to finish his waves off.

Florence put it together late in the heat to register a nine-point ride but a second ride from de Souza scored 8.60 and it was enough to hold out Florence winning the final 17.53 to 16.87.

“I’ve just beaten the best surfer on the planet, I am so happy,” de Souza said.

“I was so motivated coming into this event after making the final at Bells but just missing out.

“Every morning here I’ve been walking down the stairs showing all the past winners and hoping my name would one day be there. It’s going to be there in 2015 and I’m so happy.”

De Souza dedicated his win to his friend and former professional surfer Ricardo dos Santos who was shot dead in Brazil in January.

The new Brazilian world number one will wear the tour’s yellow jersey in front of his home fans when the World Surf League moves to the Rio Pro next month.

Burrow had wave priority in the final minutes of the semi-final and only needed a 6.16 ride to win through to the final at his home event.

“I had lots of opportunities but I just couldn’t fid the wave when I needed it.”

Florence, a previous winner at Margaret River, won through to the final with a victory over Californian Nat Young in their semi-final.

The Margaret River Pro was contested in excellent waves throughout the event and tour commissioner Kieren Perrow made the bold move to put the event on hold for an extra day after Courtney Conlogue won the women’s final on Wednesday.

Perrow’s decision was vindicated with the remaining four surfers presented with two-metre waves in off shore winds at Margaret River’s main break.

After the first three events of the year Mick Fanning is the highest ranked Australian on the world rankings, holding on to second spot ahead of Toledo.

Julian Wilson is in fourth spot ahead of fifth-placed Young and sixth-placed Burrow.