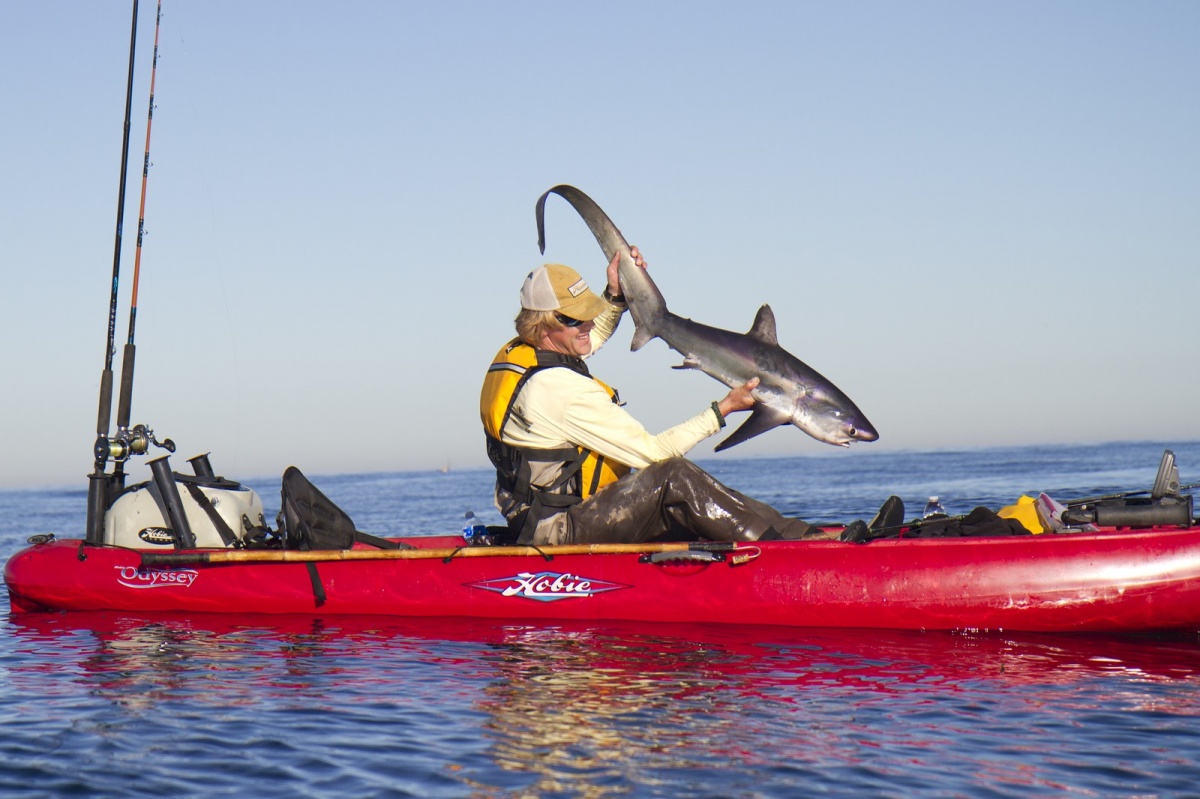 Shore-based anglers are becoming fewer around the nation, with the rise and rise of kayak fishing on sea and inland waters.

The selling of fishing kayaks, rigged from front to back for serious fishing, has become a lucrative business in Australia, with thousands of new kayaks sold every week.

• Where to catch a fish on Anzac Day

”A lot of shore-based anglers can now get into a kayak and access fish they have been unable to reach from the piers and jetties,” said Josh Holmes, from SLH Hobie in Victoria, sellers of the famous Hobie range of kayaks.

”And they catch a lot more fish from kayaks because there’s no noises (like running engines) to spook the fish.”

Actually, there’s many reasons why a kayak is a preferred option. ”They’re easier to launch, easier to transport, there’s no rego or licensing required and you catch a lot more fish.”

”The only issue at the moment with the sport is the personal locator device you need if you fish more than 2km offshore … that’s a requirement that I think needs to be sorted out.”

Mr Holmes means that under current legislation you need a personal safety locator (like an epirb) attached to your craft, rather than on your person, because a personal safety locator attached to a kayak will have a signal that works for 48 hours. ”But if you are disconnected from your kayak, what’s the point of having the device on the boat rather than on yourself?”

It’s a great point, but more important is what craft to choose should you enter the kayak market? Mr Holmes rightfully points first to the Hobie range of kayaks – especially the mirage model which has the revolutionary mirage pedal power system. Here’s a kayak that allows your larger muscle group (legs) to transport you around the waterways. ”Plus they are virtually unsinkable, they are built for safety first,” said Mr Holmes.

Deep chines for stability, beautiful seating set-ups, well-considered placement of rod holders and storage, this range of kayaks is for the serious angler who wants the whole day at sea and to be at one with nature. The quality of this craft holds its place among the $60,000+ Bar Crushers motorboats anchored at your secret spot. No sideways looks at a Hobie machine, only the admiring glances of other fishermen who wish they had the courage to put themselves 5km at sea in such a small craft.

Clear point of difference with the Hobie Mirage series is the pedal-power device they have installed. No-one else does it, and that’s why Hobie charge a bomb for them. They hold great value if you decide to sell, as well.

Viking Tempo: from $1400 to $2500 brand new, from $1300 for a fully-rigged second-hand model.
If you’re not buying a Hobie, it means either two things: you don’t have the budget, or you have the ill-conceived idea that paddling to your fishing grounds using arm power will give you the benefit of fitness. And you’d be right. The Viking range of kayaks are built for sea-going and they are serious option. They have the length, the hull design, and storage for long days on the water.

If you can’t afford a Hobie, I suggest this model provides just as quality a ride on the water, with its tri-hull design, multiple seating positions and fold-away seats and its length of 4.1m.

The best thing about a predator? You can stand-up and fish from it safely, meaning you can lure fish the edges of rivers and bridge pylons whilst standing (massive convenience).

The model is available in Australia and you can be assured of the quality.

If paddle power isn’t your thing, then the latest is electric-powered kayaks from Ocean Kayak Torque. This range has a Minn-Kota powered electric propeller built into the centre console, meaning the angler can hold position in a current without paddling, and can also use the propeller to travel at speeds of up to 10km/h.

Beautifully-equipped with storage, seatings options and very stable even in choppy waters, here’s a competitor to Hobie – although electric power means batteries, and they add to the overall weight of the craft. You have to charge the battery as well – which is obviously more work.

Tips from an expert:

Mr Holmes says the stability of the hull is the key to buying a good kayak, as well as length.

”You see a lot of shorter kayaks on the water, and these are the dangerous ones. They don’t have the length to handle chop and they are easily capsized. Anglers looking to get into the sport should be looking for something at least 4m long, and from a decent brand.

”The number one mistake people make is believing that a big, chunky kayak is safer on the water because of its bulk. The opposite is true. Ocean-going kayaks are usually set lower in the water and have less volume. They are streamlined and able to handle the swell. So good quality often means less volume.

”The other thing is take your time and learn the ropes. Too often guys get into kayaks and paddle miles out to sea on their first go, and that’s where they get into trouble. Learn from others who have been doing it for awhile and know your limits.”

Why you’ll catch more fish from a kayak