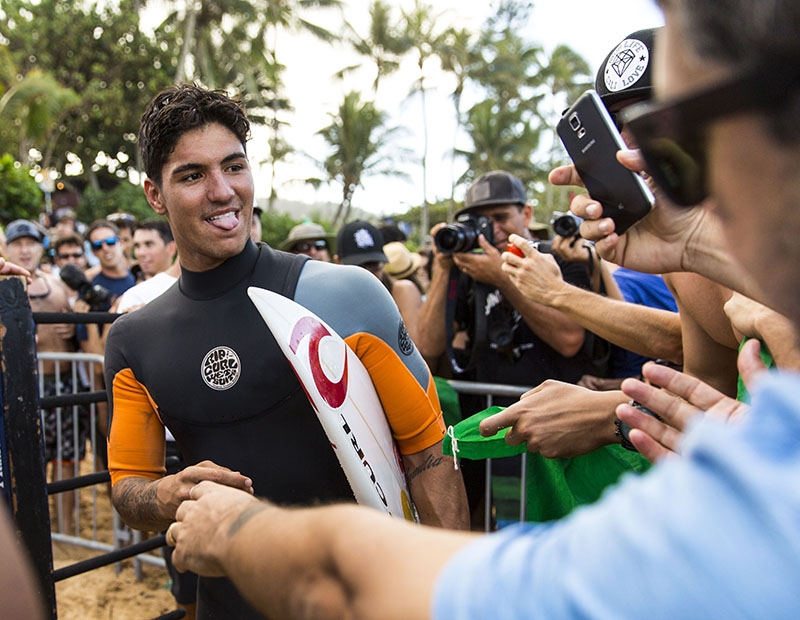 Professional surfing knew it was coming, and today it finally arrived in the form of the first world surfing champion from Brazil.

Australian Mick Fanning was clinging to hopes of a fourth world title as a dramatic final day of the Pipe Masters unfolded in Hawaii, but he was beaten in round five, knocking him out of the world title race.

World ratings leader Gabriel Medina of Brazil needs to reach the semi-finals to clinch his country’s first world title while Fanning needs to win the event.

Fanning just survived his round three heat when he came from behind to score an 8.17 ride with three minutes remaining against Jeremy Flores.

He only finished second in his fourth-round heat behind fellow Australian Adrian Buchan in the three-man contest.

Fanning needed a score of less than 2.0 to win the heat and advance straight through to the quarter finals, but could not find a wave in the last few minutes.

Medina progressed directly to the quarter-finals by winning his fourth-round heat.

American 11-time champion Kelly Slater is out of the running, losing an earlier heat to Alejo Muniz 15.50 to 13.10, with the Brazilian pulling out a 9.50 wave at the end to score a big upset.

Fanning takes on Muniz in an elimination heat in round five.