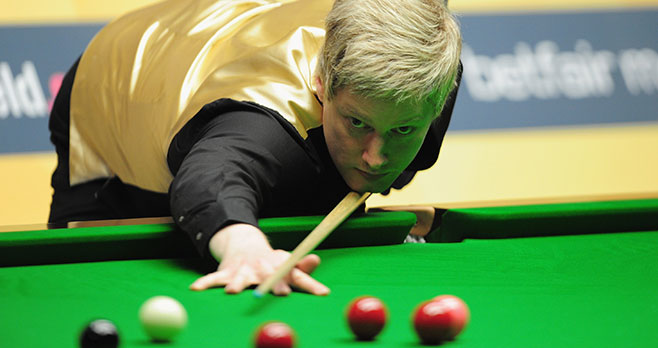 Australian world No.1 Neil Robertson has cemented his status as a snooker legend by winning the UK Championship to complete a coveted career triple crown.

Robertson recovered from 5-1 down to defeat reigning champion and world No.2 Mark Selby of England 10-7 in a tense final in York on Sunday night.

The victory means 31-year-old Robertson becomes only the eighth man, and first from outside Britain, to win all three of snooker’s major titles.

In adding to his 2010 world championship and 2012 Masters titles, Robertson has joined a select group to have achieved the feat including Stephen Hendry, Steve Davis, Ronnie O’Sullivan and Alex Higgins.

“To become the first overseas player to win all three is a really fantastic feeling,” Robertson said.

With mother Alison watching on, Melbourne-born Robertson was forced to dig deep after Selby had raced to a 5-1 lead earlier on Sunday.

The Australian won the final two frames of the afternoon session and continued his recovery in the second and concluding session of the best of 19-frame decider.

Selby, who on Saturday made professional tournament snooker’s 100th maximum break of 147 in winning his semi-final against Ricky Walden, took the first frame of the evening session but breaks of 32 and 56 kept Robertson in touch.

In the 11th frame Robertson made a fine break of 122 and he then topped that with another of 132.

He won the next two frames as well and took the 16th on the black, after Selby ‘jawed’ a pot along the cushion, to move within a frame of victory, which he completed with a break of 57.

Robertson said it took his best performance in a final to overcome Selby.

“I came out at 6-3 down and just had to play my best snooker to get back into the match,” he said.

Robertson also revealed he had been spurred on by a text message sent from a former world champion during the interval of the evening session.

His three centuries for the match also took his tally for the season to 58, three shy of Judd Trump’s all-time record of 61 set last term.

Robertson this year reclaimed the top ranking for the first time since 2010, when he became the first Australian world champion in the modern era of the game.