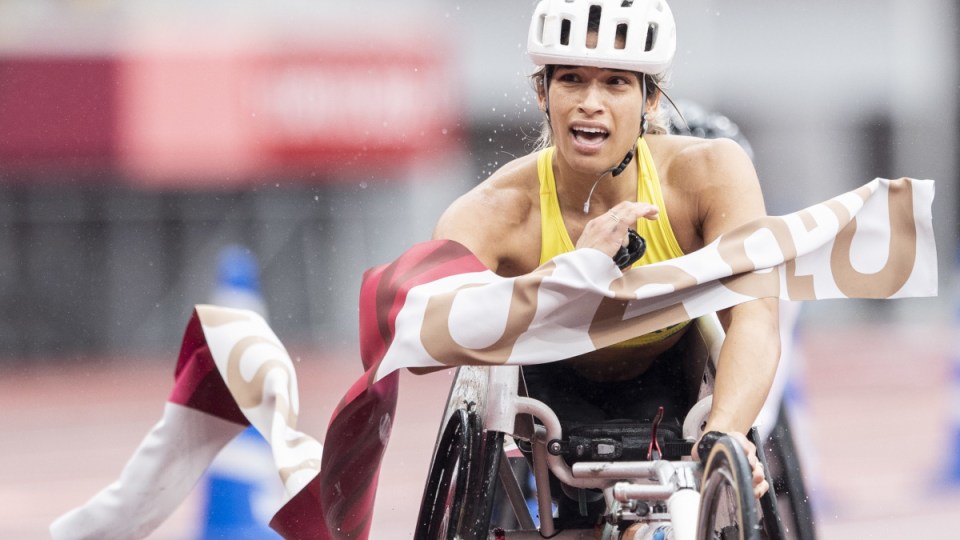 Madison de Rozario has claimed gold in the T54 marathon at the Paralympics in Tokyo. Photo: EPA

De Rozario won her second gold in Tokyo and became the first Australian woman to win a medal in a Paralympics marathon.

But compatriots Jaryd Clifford and Michael Roeger, who broke the world records in their marathon classes earlier this year, were physical wrecks at the finish.

Clifford was vomiting before and after he won a silver medal, while Roeger’s ill-timed leg injury five weeks out from Sunday’s race meant he also needed medical attention after finishing sixth.

After winning the 800m earlier in the Games, de Rozario held off Swiss Manuela Schaer at the Olympic Stadium in driving rain to take out the T54 marathon by one second.

“I didn’t think that would be the result, going in.”

American Susannah Scaroni led by more than a minute, but de Rozario was in a chase group of five that caught and then dropped her in the last few kilometres.

Then, on a hill outside the Olympic Stadium, de Rozario hit the lead and held off Schaer at the finish.

She won in one hour 38 minutes 11 seconds and Nikita den Boer was five seconds off the pace for bronze.

CAN YOU BELIEVE IT?!

Madison de Rozario comes from the clouds to claim gold!!

De Rozario’s coach, wheelchair racing legend Louise Sauvage, scouted the course for her and she knew the hill would be pivotal.

“I was definitely a little nervous about it – I’m not always the best climber,” she said.

“On a good day I can do OK and thankfully today was a good day.”

He was one of Australia’s big gold medal hopes in Tokyo and left with two silvers and a bronze.

“I thought I’d leave these Games shattered if I didn’t win a gold medal,” he said.

“If I do win a gold medal (at another Games), it will be tough to top today.”

.@JarydClifford thought he'd leave these Games shattered if he didn't win a gold medal. But now:

"If I do ever win a gold medal one day, it'll be tough to top today."#Tokyo2020 | #Paralympics pic.twitter.com/gZRzULCKEQ

Clifford said he was “cooked”, revealing he vomited at around 30km before also being physically sick inside the stadium.

“My body is so sore. That’s the hardest thing I’ve ever done,” he said.

Roeger led until halfway in the T46 marathon and was disappointed he did not place higher.

It was an enormous effort from @michaelroeger to battle through injury and still finish sixth in the men's T46 marathon.

He chats with @MattCarmichael about the process, why he still ran and what comes next…#Tokyo2020 | #Paralympics pic.twitter.com/lS1ujcI4df

Christie Dawes was eighth in de Rozario’s race and became an instant hero to all Australian parents who are home schooling during lockdown.

“Compared to home schooling and lockdown, this is a bloody cakewalk, a marathon in the rain … but to leave my kids, do the quarantine, it’s been a big effort,” she said.

She paid tribute to her husband Andrew, also an athletics coach, who has minded the fort.