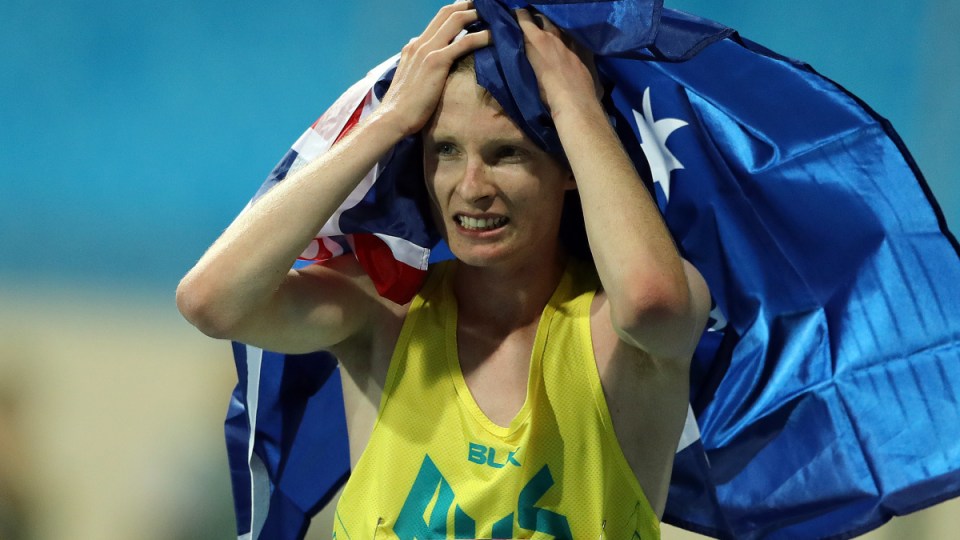 Clifford celebrates a win at the World Para Athletics Championships in Dubai in 2019. Photo: Getty

Jaryd Clifford has a simple criteria for the daunting challenge of running the marathon at the Paralympics – what would Kurt do?

The 21-year-old athletics wunderkind will draw on the inspiration of Australian wheelchair racing legend Kurt Fearnley when he races in Tokyo.

Clifford has added the marathon to his Games program, which also includes the 5000 metres and 1500 metres on the track.

It is something of a risk, given his only other marathon was in April when he was initially pacing for Paralympic teammate Michael Roeger.

That race has gone down in athletics folklore, with Clifford and Roeger both breaking the world records for their categories.

Clifford was going to pull out before the finish, but instead he broke the T12 vision-impaired mark with his time of 2 hours 19 minutes 2 seconds.

Roeger, who was born without his right hand, clocked 2:18:52 to break the T46 world mark for the fourth time.

Despite breaking the world mark almost by accident, Clifford said it was “a big risk” to run the marathon at Tokyo.

“People have said to me, are you scared of doing a marathon without training again, knowing you’re going to finish it and in the heat of Tokyo?,” Clifford told said.

“Honestly, yeah, it scares the s— out of me.

“But what would Kurt do? I don’t think Kurt would be scared – or if he was, it wouldn’t stop him from doing it.

Ryley Batt has taken his place as co-captain of the Paralympic team.

Clifford said he was in “the best shape of my life” and he is one of the headline names in Australia’s team for the Games.

“My goal, my dream is to win a Paralympic gold medal and I have three opportunities to tick that box,” he said.

Clifford competed at the Rio Games as a 17-year-old and finished seventh in the 1500 metres, which attracted plenty of interest because the winning time was faster than the same event at the Olympics.

Clifford noted the Olympic record fell in the 1500 metres at the Tokyo Olympics, meaning he’d need an Australian record to match that feat at the Paralympics.

But he does not deny paying some attention to what happened in the distance running events at the Olympics.

“We’re still trying to persuade some people that the Paralympics is elite sport, not just incredible stories,” he said.

“Gold is the goal, but a fast time would also be pretty cool.