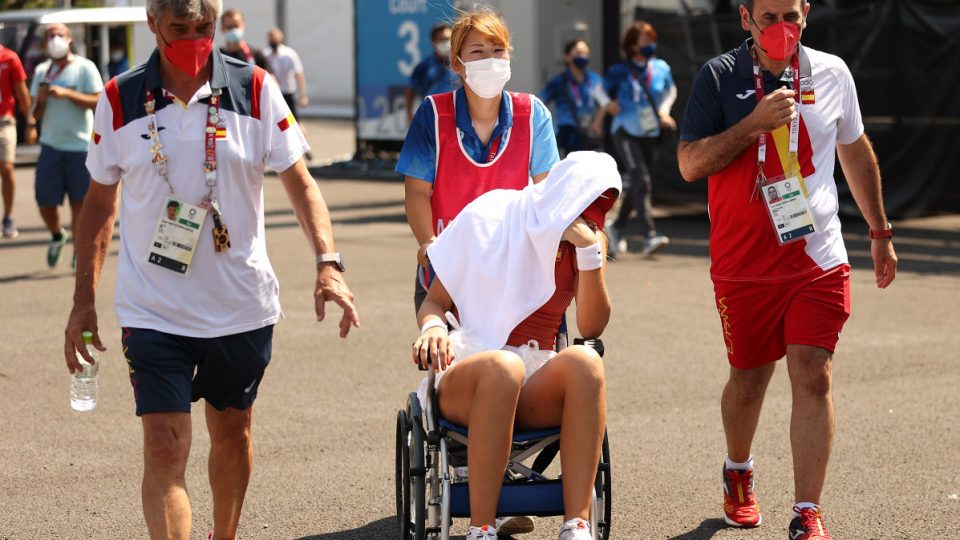 Suffocating heat and humidity has forced changes to tennis matches at the Tokyo Olympics, after world number two Daniil Medvedev said he could have died on the court.

A statement on Wednesday night by the International Tennis Federation confirmed the rest of the competition would start at 3pm instead of 11am.

“​Following extensive consultation and in the spirit of always keeping the best interests of player health and welfare at the forefront of our decisions, the ITF has announced a change of schedule due to the increasing heat and humidity currently being experienced in Tokyo, Japan,” the statement said.

“The decision … is possible due to the outcomes of today’s matches across the five competitions being staged and the size of [the] player field and is designed to further safeguard player health.”

Medvedev, in his match against Fabio Fognini of Italy, struggled with the heat so much he needed to take two medical timeouts and one visit from a trainer.

At one point the chair umpire, Carlos Ramos, asked him if he could continue playing.

“I can finish the match but I can die,” Medvedev replied.

“If I die, are you going to be responsible?”

After the match, Medvedev said he felt “darkness” in his eyes.

“I didn’t know what to do to feel better,” the ROC player said.

“I was ready to just fall down on the court.”

Still, the second-seeded Medvedev produced a 6-2 3-6 6-2 win over Fabio Fognini of Italy to reach the quarter-finals at the Tokyo Olympics.

She left the court in a wheelchair after retiring from her quarter-final match against Marketa Vondrousova because of illness.

Vondrousova, the Czech player who eliminated Naomi Osaka a day earlier, had won the first set 6-3 and is now into the semi-finals medal round.

The temperature rose to 31 degrees Celsius on Wednesday but the heat index made it feel like 37 degrees with humidity above 70 per cent.

Meanwhile, with the topic of athletes’ mental health and pressure being discussed at the Olympics, tennis superstar Novak Djokovic says: “Pressure is a privilege.”

The top-ranked Serb was asked how he deals with the pressure of attempting to accomplish something that no man has done before in tennis: completing a ‘golden slam’ of all four grand slams and Olympic gold in the same calendar year.

Steffi Graf in 1988 is the only tennis player to achieve this.

“Pressure is a privilege, my friend,” Djokovic said in answer to a reporter’s question on Wednesday after beating Spain’s Alejandro Davidovich Fokina to reach the quarter-finals.

“Without pressure, there is no professional sport.

“If you are aiming to be at the top of the game, you better start learning how to deal with pressure and how to cope with those moments – on the court, but also off the court.”

Djokovic, who has already won the Australian Open, French Open and Wimbledon this year and needs the Tokyo Games title and the US Open to complete his ‘golden slam’.

Elsewhere, Ash Barty returns to the court on Thursday, when play begins at the later start time.

It’s her third and final chance at gold, pairing with John Peers in the mixed doubles after she and Storm Sanders lost a golden chance of a semi-final berth in a 4-6 6-4 10-7 loss to Barbora Krejcikova and Katerina Siniakova.

‘I can die’: Brutal heat forces reschedule to Olympic tennis