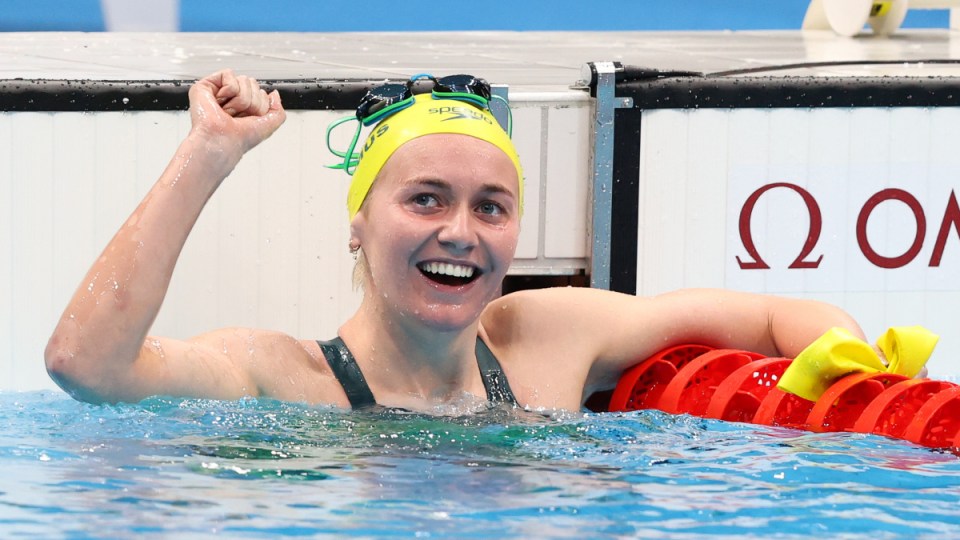 For Ariarne Titmus, this sequel may better the original.

And much of the Tokyo Olympics will pause for the reprise of their heroic 400m freestyle final when the Australian pipped the American great.

“I enjoy racing Katie – it’s exciting for everyone and myself,” Titmus said after her 200m semi-final.

Titmus’ medal race headlines action at the pool, with Madi Wilson joining Australia’s best hope in the 200m freestyle final, and Maddy Gough and Kiah Melverton racing for a place on the podium in the 1500m freestyle final.

Kyle Chalmers shoots to defend his Olympic 100m freestyle crown, after a restrained effort on Tuesday night, cruising to victory in his heat, qualifying third-fastest overall.

Chalmers’ second-leg of defence of his gold medal comes on Wednesday night in the semi-finals.

The men’s 4x200m freestyle relay team attempts to break into medal contention while Brianna Throssell also competes in the semi-finals of the women’s 200m butterfly.

Dennis was well on the way to the podium in the same event at the Rio Games when a handlebar extension snapped, meaning a bike change that relegated him to fifth.

He bypassed last weekend’s road race to focus on the time trial and is one of the medal favourites, while Grace Brown is a contender in the women’s event.

The women’s four are big medal chances in rowing after posting the fastest qualifying time.

The men’s fours will try to dethrone Great Britain, who have won every gold medal in the event since Sydney.

After they row for gold in the fours on Wednesday, Jessica Morrison and Annabelle McIntyre will also back up for the pairs semi-finals.

The day after missing out on a gold medal in the K1, Jess Fox will back up in the opening two runs of the C1 in canoe slalom.

It’s a busy day for tennis star Ash Barty – after she and John Peers play Argentina in the opening round of the mixed doubles, the world No.1 and Storm Sanders will take on the Czech Republic in the women’s doubles quarter-finals.

Sam Stosur and Ellen Perez have a doubles quarterfinal against Switzerland.

The Boomers take on Italy in basketball and the two hockey sides are also in action, with the Kookaburras playing New Zealand and the Hockeyroos going up against Japan.

James Willett, Thomas Grice, Laetisha Scanlan and Penny Smith have qualifications for the trap event in the shooting.

Boxer Skye Nicolson is into the featherweight quarter-finals against Karriss Artingstall from Great Britain, as middleweight Caitlin Parker and light heavyweight Paulo Aokuso are in their preliminaries.

Australia’s women’s soccer team earned a quarterfinal berth against Great Britain, after a scoreless draw with the US to finish third in Group G.

Australia’s men’s rugby sevens team lost 19-0 in the quarterfinal to Fiji, while the Opals lost to Belgium in basketball, 85-70.

Titmus lines up for another showdown