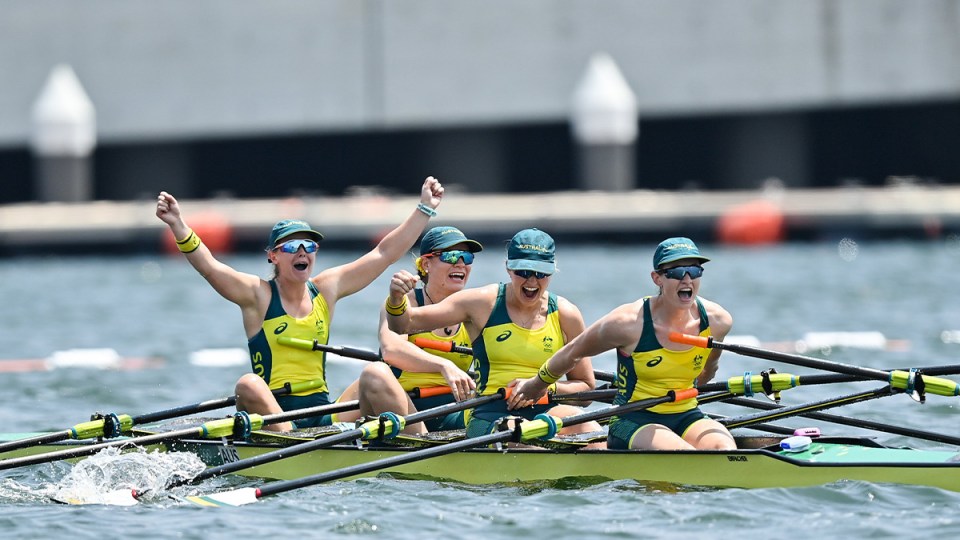 Australian rowers are on top of the world with the men’s and women’s coxless four crews both winning Olympic gold while the quad sculls both claimed bronze.

The men ended Great Britain’s five-Olympic dominance of the event, wrestling back the mantle of Oarsome Foursome.

But they have to share it with the women, who took gold in the four in a return to the Olympic schedule after almost a 30-year absence.

A re-worked finals program due to poor weather at Sea Forest Waterway created a medal rush for the Australians.

The men’s and women’s quad scull crew also both chipped in with hard-earned bronze medals to cap a memorable morning.

While Australia won gold in the men’s four in 1992 and 1996 to earn the original Oarsome Foursome tag, Great Britain had won the event at every Olympics since.

They crossed the line in an Olympic best five minutes 42.76 seconds, with the fast-finishing Romania 0.37 seconds behind.

Hill was part of the Rio crew that won silver in the event.

They had to hold off a late surge by the Netherlands, while Ireland won bronze.

Australia crossed the line in an Olympic best of six minutes 15.37 seconds, with the Netherlands just 0.34 seconds behind.

The women’s coxless four, which made its first and last appearance at the 1992 Barcelona Olympics, replaces the lightweight men’s four in this year’s program as part of a push for gender equality.

McIntyre and Morrison will be back on the water lining up in the semi-final of the women’s pair as they bid for a rare Olympic rowing medal double.

In the men’s quad scull, the crew of Caleb Antill, Jack Cleary, Cameron Girdlestone, Luke Letcher finished with a burst to get on the podium behind the Netherlands and Great Britain.

It was Girdlestone’s second Olympic medal after winning silver in the event in Rio.

The bronze medal won by the young women’s quad scull crew Ria Thompson, Rowena Meredith, Harriet Hudson, Caitlin Cronin was a surprise with the Australians making their way through the repechage round into the final.