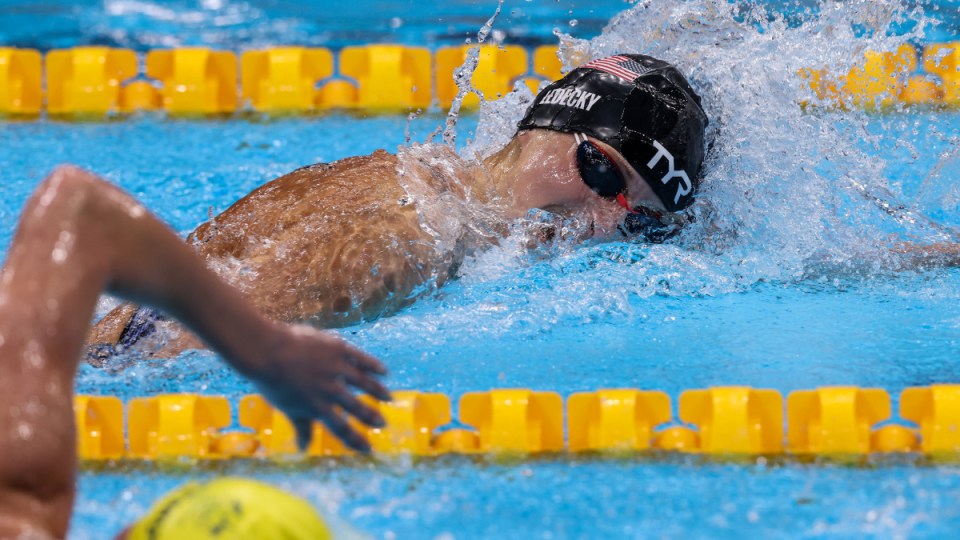 Katy Ladecky and Ariarne Titmus do battle in the 400-metre freestyle – won by Titmus. Photo: Getty

Finally, a gold medal in Tokyo for Katie Ledecky.

The American star bounced back from the worst finish of her brilliant Olympic career to take the first gold medal in the women’s 1500-metre freestyle on Wednesday.

It wasn’t quite the breeze that everyone expected after Ledecky built a big lead right from the start, then worked hard to hold off American teammate Erica Sullivan’s blazing finish.

“I think people maybe feel bad for that I’m not winning everything and whatever, but I want people to be more concerned about other things going on in the world, people that are truly suffering,” Ledecky said.

It was quite a morning at the Tokyo Aquatics Centre for Ledecky, who seemed a bit overcome by the ups and downs she experienced in a little over an hour.

She tumbled over the lane rope to give Sullivan a hug, let out an uncharacteristic scream toward the American cheering section in the mostly empty arena and seemed to be holding back tears as she pulled her goggles back down over her eyes before exiting the pool.

In her first final of the day, Ledecky was blown away by her Australian rival, Ariarne Titmus, who made it two-for-two over the American with a victory in the 200m freestyle.

Ledecky didn’t even win a medal – the first time that’s ever happened to her in an Olympic race.

She was far behind all the way, never getting any higher than her fifth-place finish.

“After the 200, I knew I had to turn the page very quickly,” Ledecky said.

Her voice choked with emotion. She crunched her eyes trying not to cry.

“They’re the toughest four people I know,” Ledecky said. “And that’s what helped me get through that.”

US star Ledecky collects gold – in an unlikely event