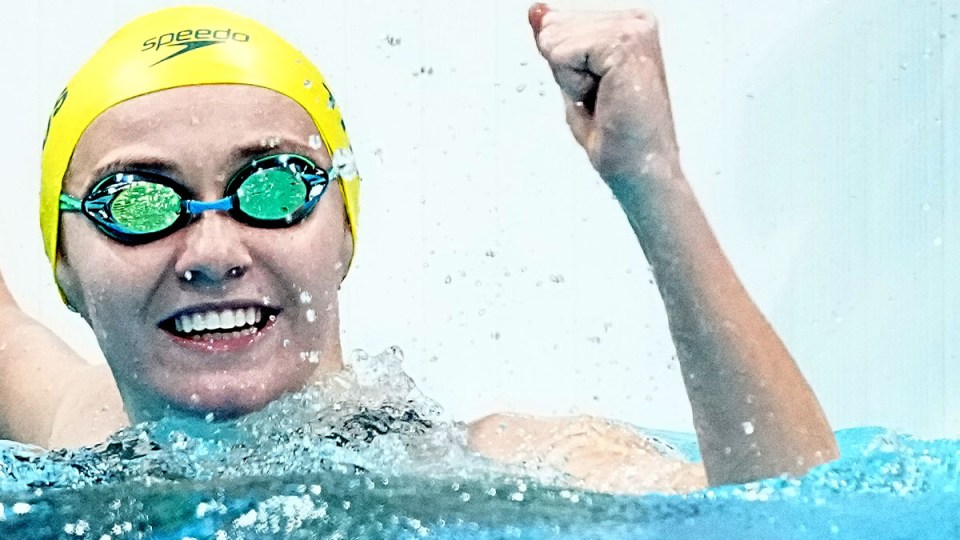 In a last-minute burst of energy, emerging Australian swimming legend Ariarne Titmus has taken out the gold in the women’s 200-metres freestyle.

The Australian star claimed her second gold medal of the Tokyo Games on Wednesday morning after a famous win in the 400-metre event on Monday.

Speaking to 7News after the race, Titmus said she didn’t think it would really sink in until she gets home and rests.

“I think once I stop racing I can release everything,”  Titmus said.

The 20-year-old said after two gold medals she was still thinking about her next moves, with the relay and the 800-metre events still to come.

“I don’t want to ruin the rest of my meet by celebrating too hard but I’m very proud of what I’ve achieved,” she said.

It’s a third gold medal for Australia on day five – one in the pool and two in the rowing.

The the highly anticipated 200-metre freestyle final was billed as a rematch between Titmus and American foe and defending champion Katie Ledecky, but Ledecky was no match for the Tasmanian.

Much of the Tokyo Olympics paused to watch the race, after a heroic 400-metre freestyle victory on Monday when the Australian vanquished the American titan.

Haughey held the lead until the last 20 metres when Titmus finished in a flurry to win in an Olympic record time of one minute 53.50 seconds.

After both qualified in the 200-metre semi-finals, Titmus was looking forward to facing Ledecky again.

“I enjoy racing Katie – it’s exciting for everyone and myself,” Titmus said.

Titmus joins Shane Gould in 1972 as Australian women to complete the 200m-400m golden double at an Olympics.

She will meet Ledecky once more at the Tokyo Games in the 800-metres, with the American red-hot favourite over the longer distance.

“When it comes to what will be the 3.0 battle in the 800 freestyle, that is when Katie Ledecky has Arnie covered,” Australian swim legend Ian Thorpe told the Seven Network.

“And I want Arnie to prove me wrong.”

In an epic day for Australian rowing, both the men’s and women’s coxless four have paddled their way to victory, bringing home two more gold medals for Australia.

With the women’s event returning to the Olympic rowing schedule after almost a 30 year absence, the Australian crew of Rosie Popa, Lucy Stephan, Annabelle McIntyre and Jessica Morrison stormed to gold.

They held off the Netherlands crew for silver, while Ireland won bronze.

The world champions set an Olympic record with their heat performance, moving into the final on Wednesday as gold medal favourites.

And they lived up to their top billing, leading from start to finish, although the Dutch came at them in the closing stages lifting their stroke rating.

Australia crossed the line in an Olympic best of six minutes 15.37 seconds, with the Netherlands 0.34 seconds behind.

Within an hour, Australia’s blokes made it a golden rowing double after the women topped the podium in the same event in the previous race.

Romania finished with a flourish to take the silver medal while Italy crossed in third, with Great Britain coming home in fourth.

The Aussies crossed the line in an Olympic best  five minutes 42.76 seconds, with Romania 0.37 seconds behind.

While Australia won gold in the men’s four in 1992 and 1996 to earn the Oarsome Foursome tag, Great Britain had won the event at every Olympics since.