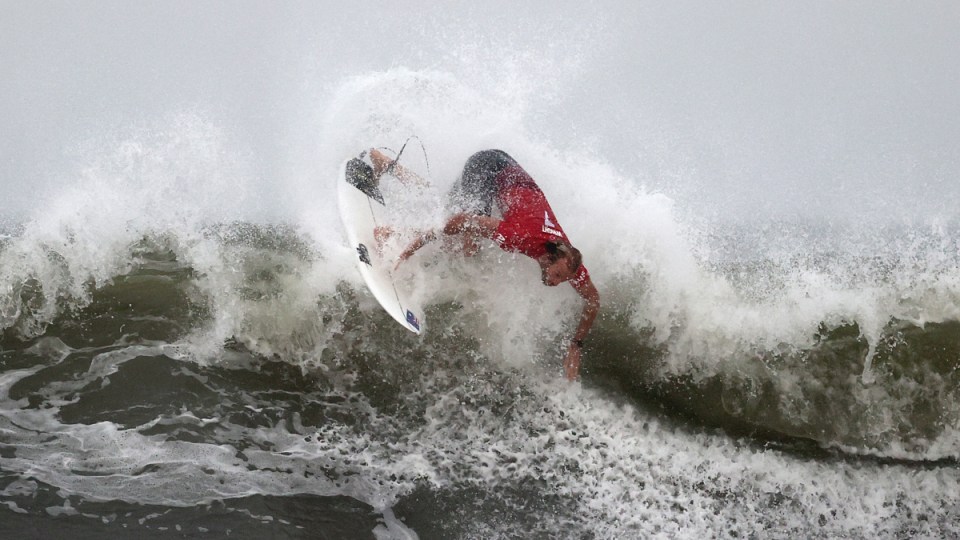 Australia's Owen Wright made the most of the storm-induced waves to push through to his quarter final. Photo: Getty

Surfing’s first Olympic finals have been brought forward 24 hours to Tuesday because of a tropical storm bearing down on Tokyo.

But rain and wind delayed the start of the women’s triathlon on Tuesday morning by at least 15 minutes.

The weather will also make for dangerous conditions on the bike leg, with Australians Ashleigh Gentle, Emma Jeffcoat and Jaz Hedgeland racing.

Australian surfing stars Sally Fitzgibbons and Owen Wright revelled in the windier conditions to book quarter-final berths on Monday and might benefit from the tropical storm in their pursuit for gold.

“After a review of the surf conditions forecast for Tuesday and Wednesday, tournament officials have decided to move the women’s and men’s Olympic surfing finals from Wednesday to Tuesday,” said a Games statement.

“The International Surfing Association technical director assessed the overall impact of the surf forecast on the final day of competition and adjusted the schedule.”

Tokyo organisers had said earlier they were not planning to reschedule more events for the Games as tropical storm Nepartak churned toward Japan’s main island.

Rowing and archery events have been moved due to the storm, which is expected to head over Japan’s north-east coast on Tuesday and could bring heavy rain to the capital.

Rowing races were rescheduled for later in the week, while Monday’s events were moved to Sunday in anticipation of the storm.

Canada, vying for bronze, said its flights home were scheduled for Wednesday. The next were potentially not available until Saturday because the pandemic has limited travel options.

The storm is forecast to pass to the north of Tokyo, according to the Japan meteorological agency.