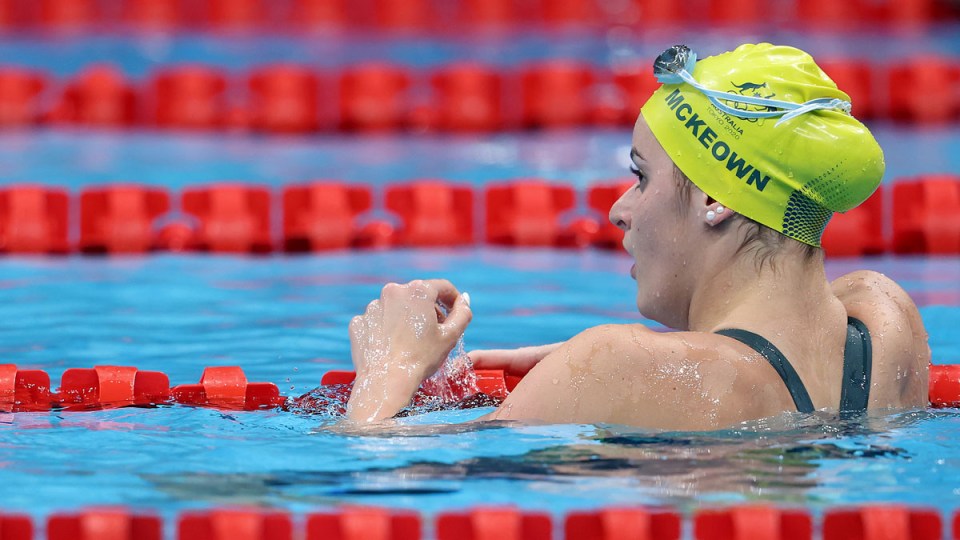 The win was Australia's third gold of the Tokyo Games. Photo: Getty

Australian swimmer Kaylee McKeown has won a gold medal in the 100-metre backstroke at the Tokyo Olympics, while surf star Sally Fitzgibbons has been wiped out.

It left Owen Wright as the last Australian in the surf on Tuesday afternoon, bringing home a bronze medal for Australia in the finals.

McKeown’s triumph is Australia’s third gold of the Games, following the women’s 4x100m freestyle relay and Ariarne Titmus in the 400m freestyle.

McKeown accidentally dropped the f-word in her excitement during a post-competition interview, when asked to send a message home to her family.

“F— YEAH!” she cried, before quickly realising she had sworn live on air.

The swimmer immediately looked sheepish, covering her mouth she backed it up with an apologetic “oh sh-t”.

McKeown offered some cleaner sound bites on her way out.

“It’s definitely something that people dream of. Something I have dreamed of. To make it reality is… Yeah. Really amazing. I’m just thankful I have a good support team,” she said.

Her triumph comes against a backdrop of family tragedy, with her father Sholto losing his battle against brain cancer last August.

The 20-year-old swimmer dedicated her world record at Australia’s selection trials to her father.

“I use it every day that I wake up,” McKeown said at the June trials.

“I know it’s a privilege to be on this earth and walk and talk.”

Meanwhile Tasmanian daredevil Ariarne Titmus will get another shot at gold, swimming straight through to her second Olympic final following a stunning gold medal win on Monday.

A day after beating American Katie Ledecky in the 400-metre event, both women made it through the 200-metre freestyle semi-finals.

“I mean I knew that these were going to be fast,” Titmus said.

Australian Madison Wilson will also swim in the final, but all eyes will likely be watching the duelling pair as they enter the pool on Wednesday.

In boxing, Australian featherweight Skye Nicolson has advanced to the quarter-finals, recording a hard-fought and emotive victory over South Korean Im Aeji.

After winning the round in a split decision, Nicolson is just two steps away from reaching the gold-medal bout.

The Kookaburras have crushed reigning Olympic champions Argentina 5-2 on Tuesday, ensuring they remain on track to top Pool A.

After penetrating the attacking circle 24 times compared to Argentina’s seven, Australia’s hockey stars have put their rivals on notice while pursuing their first Olympic gold medal since Athens 2004.

Osaka crashes out of the Olympics

In a shock twist, the face of the Tokyo Olympics Naomi Osaka of Team Japan has crashed out of the Games on Tuesday.

The 23-year-old was beaten 6-1 6-4 by Marketa Vondrousova of the Czech Republic in the third round of the women’s singles.

Osaka had hoped to play a starring role on the court, but lighting the Olympic flame at the opening ceremony will be the high point.

A devastated Fitzgibbons was in tears after the loss, telling Channel Seven she was “shattered” at Tuesday’s result, calling it the toughest loss in her career.

After losing 4-1 to Mexico in their final pool game in Tokyo, Aussie Spirit missed their opportunity to face Canada for the bronze medal.

It is the first time in five Olympics that Australia will not play off for a softball medal, placing at each of softball’s four previous Games between 1996 and 2008.

Hopes running high for the rapids

Two-time Olympic medallist Jessica Fox is looking for an elusive gold in the rapids on day four of the Tokyo Olympics.

Tuesday is the day for it, with Fox due to compete in the semi-finals at the Kasai Canoe Slalom Centre a little after 4pm.

A three-time K1 world champion, Fox is yet to stand at the top of an Olympic dais, winning silver in London in 2012 and bronze in Rio four years later.

Meanwhile, Australia’s Rugby Sevens will advance to the quarter-finals, as the best-placed third placed team.

We also saw Aussies in the pistol range on Tuesday, but all lost their shot at a medal.

US migrant truck driver was ‘on meth’