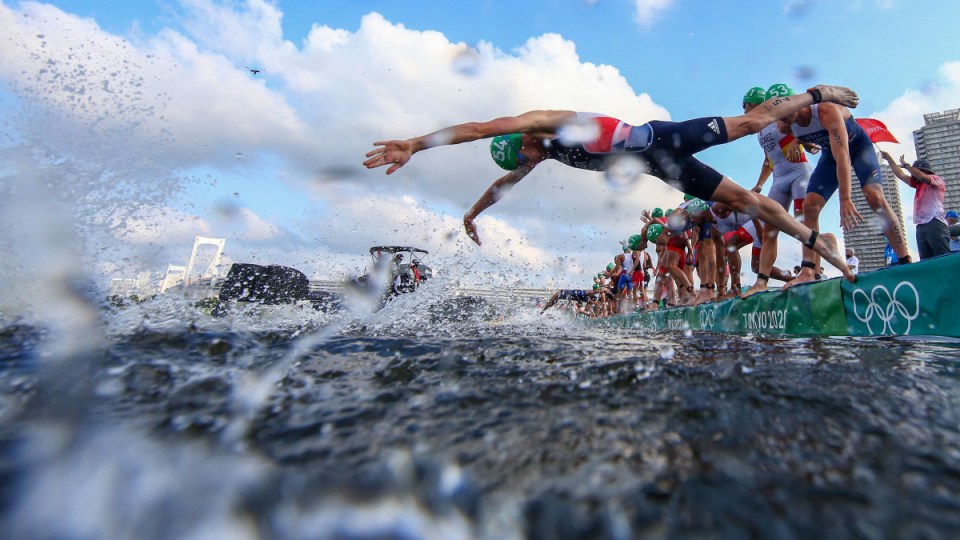 The men's triathlon final had to be restarted after a camera boat blocked half the field from diving into the water. Photo: Getty

There were chaotic scenes at the start of the men’s Olympic triathlon in Tokyo on Monday morning, after a boat blocked the entry of almost half the competitors into the water.

The chaos came as the starter tried to send the 56-strong field away for the opening 1500-metre swim leg – but many were left stranded when they were blocked off by a camera boat.

To make matters worse, the errant boat then nearly reversed over some swimmers at Tokyo’s Odaiba Marine Park.

“The boat’s in the way! Get out of the way! What is going on?” commentator Dave Culbert yelled.

“Complete chaos. They’re going to have to call them back.”

Support craft frantically tried to get the message of a false start to those in the water to steer them back to the pontoon.

The race was eventually restarted, with competitors safely on their way about 10 minutes later.

Blummenfelt, ranked world No.2, broke away from Yee and Wilde late in the 10-kilometre run leg and charged to the line, winning by 11 seconds.

The best-finishing Australian was Tasmania’s Jake Birtwhistle, who was 16th in his first Olympics.

Queensland’s Matt Hauser, also making his Olympic debut, was 24th while Aaron Royle, from NSW was two places back in 26th.