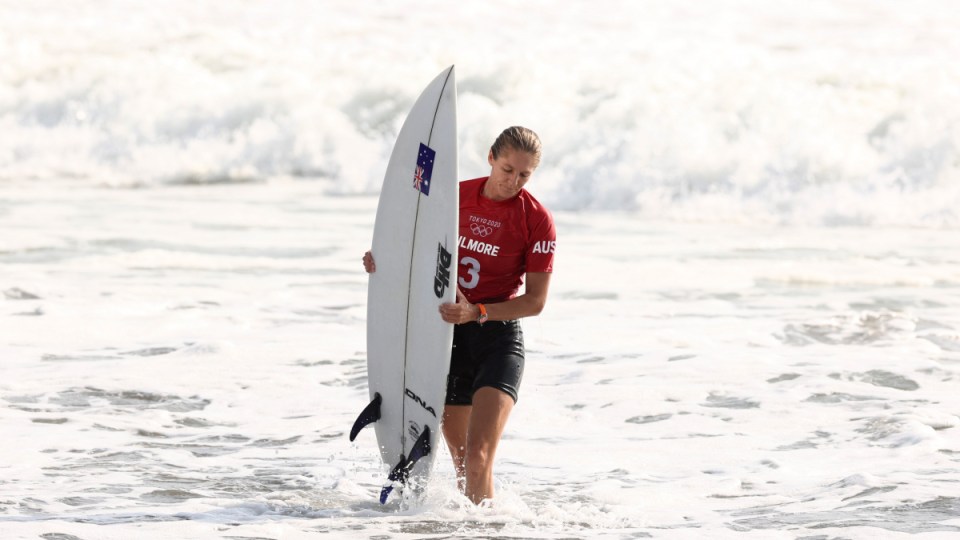 A dejected Stephanie Gilmore leaves the water after being eliminated in her heat. Photo: Getty

Seven-time world champion Stephanie Gilmore is out of the hunt for an Olympic surfing medal with a shock loss to South African Bianca Buitendag.

The Australian star took to the water in the opening heat of round three on Monday at Tsurigasaki beach and got off to a promising start.

But 27-year-old Buitendag, who no longer competes on the World Surf League, nailed two consecutive wave scores of 6.83 and then 7.10 to storm past Gilmore.

That left Gilmore needing 7.76 to regain the lead and while she had 14 minutes up her sleeve, couldn’t find the winning waves with the final margin 13.93 to 10.0.

World No.3-ranked Gilmore was in great touch in her opening heat, posting the highest score of the women’s competition, but couldn’t replicate that form a day later.

Buitendag was ranked as high as world No.4 in 2014 but hasn’t had full-time status since 2016 and secured Olympic qualification through the 2019 ISA World Surfing Games.

Netflix will soon have ads, but it might not be what you think
US men’s basketball team loses for first time in 17 years
Today's Stories

NSW women claim State of Origin crown in a thriller

US, China to be locked out of Pacific Island talks

WHO eyes decision on monkeypox ’emergency’