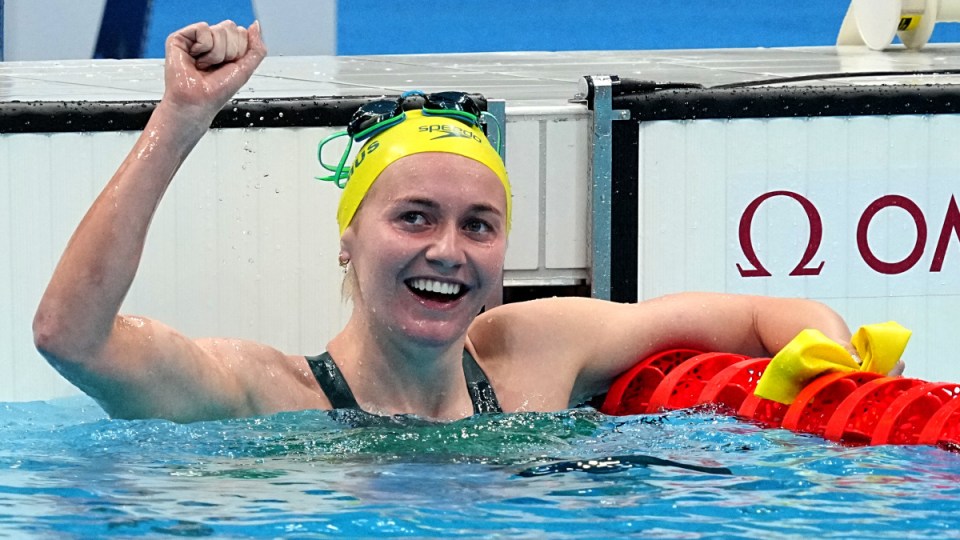 Titmus reacts after her gold-medal swim in the Tokyo pool. Photo: Getty

And Titmus’s gold is destined to live most large after she hunted down Katie Ledecky in a titantic duel, handing the American megastar her first-ever defeat in an Olympic individual race.

“It’s surreal. It’s probably the biggest thing you can pull off in your sporting career,” she said.

Titmus was within a whisker – 0.23 seconds – of Ledecky’s world record.

The Australian snapped at Ledecky’s heels for the initial 250 metres in what appeared a cunning plan, but was really mid-race concern.

“I knew she would be prepared so I guess I had to trust myself.

“I tried to stay as composed as I could and use my speed.”

Titmus ominously dialled up her pace: With 100 metres to go, she was within 0.16 seconds, and closing.

The Australian then overwhelmed Ledecky, a renowned strong finisher who has five Olympic golds and 15 world championships in a storied career.

“To pull it off against someone who has an amazing second half of her race, I’m really proud of that,” Titmus said.

“I thanked her at the end. I wouldn’t be here without her.

“She has set this amazing standard and if I didn’t have someone like her to chase, I wouldn’t be swimming that way.”

Three-time gold medal winning Paralympian Dylan Alcott tweeted that he was so excited by Titmus’ swim that he “almost stood up at the end”.

But the ecstatic reaction of Titmus’ ball of energy coach Dean Boxall almost threatened to overshadow the moment, with his “seizure of excitement” quickly going viral on social media.

Some might pity the Japanese Olympic usher who tried to restrain the eccentric Australian swim coach as he ripped off his mask and made advances on a balustrade.

When his star swimmer beat the American legend Boxall momentarily lost his mind, but Titmus said she was trying to hold off getting too excited – with two more duals with Ledecky to come.

“I can enjoy this afterwards and not get too excited,” she said.

Boxall later told 7News he felt he needed to apologise for ripping the mask off and said he “lost it in the moment.”

More medals for the green and gold

Titmus’ triumph followed McKeon adding another medal to her collection.

After winning gold with Australia’s 4×100-metre freestyle relay on Sunday, McKeon’s 100-metre ‘fly bronze is the sixth medal of her Olympic career – two of each colour.

The 27-year-old, a medal prospect in five more events, could depart Tokyo as Australia’s most successful Olympian.

Swim legend Ian Thorpe has that honour with nine medals while Thorpe, Alicia Coutts and Shane Gould hold the Australian record for most medals at a single Olympics, five.

McKeon produced a personal best in the ‘fly final, after finishing sixth in the event at the 2016 Rio Games.

“To do a PB in an Olympic final, I’m pretty happy,” McKeon said.

“Really awesome … I didn’t really put a limit on it, I was just focusing on my process.”

And the men’s freestyle relayers picked up a bronze on the back of a sizzling last leg by Kyle Chalmers.

The defending 100-metre Olympic champion hoisted Australia from fifth to the podium with a stunning split in 46.44 seconds – the fastest split of anyone in the entire race.

Gilmore posted the highest score of the women’s competition in the first heat on Sunday, but couldn’t replicate that form on Monday.

But fellow Aussie Sally Fitz has kept the dream alive for Australia, eliminating French surfer Pauline Ado in round two.

Rejuvenated gold medal prospects the Hockeyroos smashed China in a whopping 6-0 win on Monday, a statement victory to follow their opening 3-1 win over Spain on Sunday.

The No.2-ranked side next face Japan, who lost 4-3 to China, on Wednesday.

Australian Dan Watkins is through to his first Olympics final in the Canoe Slalom, while four-time mountain bike Olympian Dan McConnell will peddle for gold in the men’s cross country final on Monday afternoon.