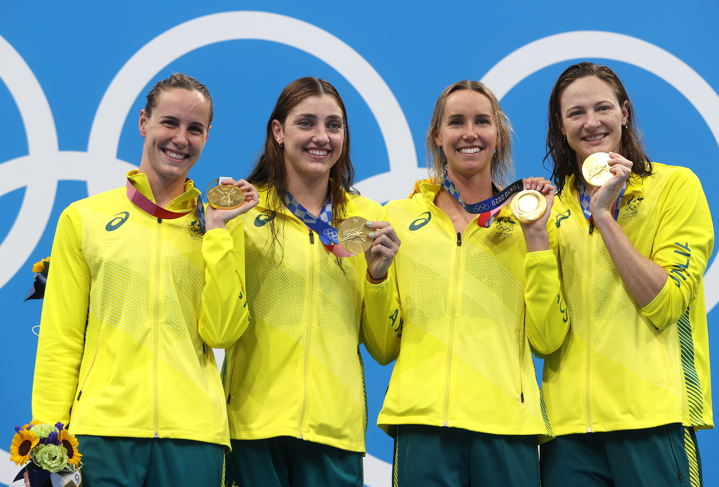 The medals are gold and those smiles on the women's 100 metre relay team are even brighter after bagging Australia's first Tokyo gold. Photo: Getty

Australia has won the Olympic women’s 4x100m freestyle relay gold medal at the Tokyo Games in a world-record time.

The time bettered Australia’s previous world benchmark of 3:30.05 set at the 2018 Commonwealth Games.

And the comprehensive victory – almost three seconds ahead of silver medallists Canada – delivers Australia a third consecutive Olympic title in the event.

At the 2016 Rio Games, she teamed with sister Bronte, McKeon and Brittany Elmslie to collect gold.

In Sunday’s final in Tokyo, the Australians were gifted early momentum by Bronte Campbell, who left her team lurking ominously in second spot after her leg.

Teen Harris then took the lead on the second leg and the Australians were never challenged thereafter, with McKeon and finally Campbell increasing their advantage.