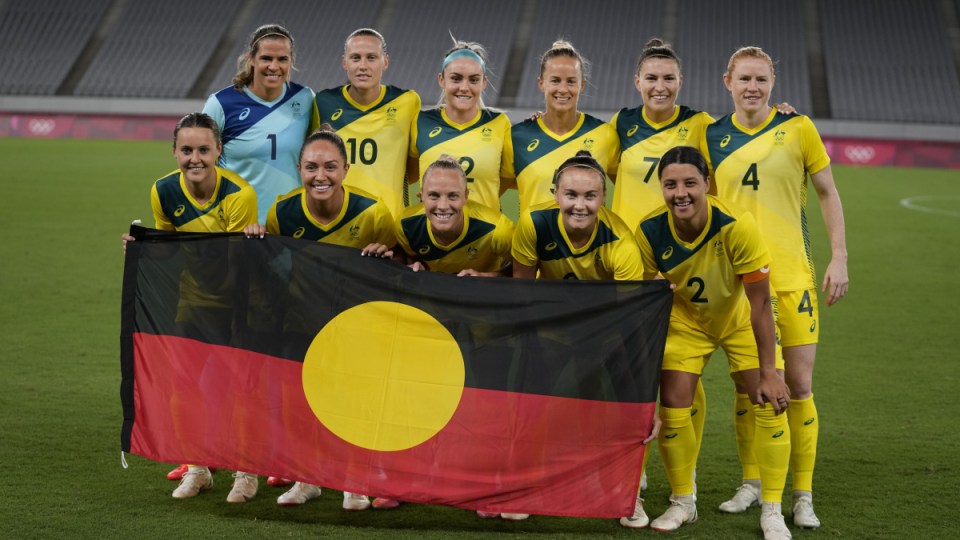 The Matildas posed for a group photo with an indigenous flag ahead of their Olympics opener against New Zealand. Photo: AAP

Boomers captain Patty Mills believes the Matildas’ public display of pride in the Aboriginal flag is reflective of a strong team bond.

The Matildas opted to pose behind an Aboriginal flag, rather than the Australian flag, for a pre-match photograph prior to starting their Tokyo Olympic campaign with a 2-1 win over New Zealand on Wednesday night.

The gesture came as several women’s soccer teams took a knee before their games in support of the Black Lives Matter movement.

The International Olympic Committee forbids the “demonstration or political, religious or racial propaganda in any Olympic sites, venues or other areas”.

But that rule was relaxed for Tokyo 2021 to allow athletes to express themselves under certain criteria, with protests still forbidden during medal ceremonies plus Friday night’s opening ceremony.

Mills, who is of both Torres Strait and Aboriginal heritage, will soon become Australia’s first Indigenous flag-bearer at an Olympics.

Mills says his squad, which faces Nigeria on Sunday as it seeks to secure the Boomers’ first Olympic medal, is yet to discuss whether to take a knee or send some form of pre-match message.

“We are very focused and have our head in the sand, [concentrating] on what we’re trying to achieve here and that’s a gold medal,” he said.

But the 32-year-old, a household name in his homeland since winning the 2014 NBA championship with San Antonio, commended the Matildas for what “seemed like it was a team thing, that everyone had gotten behind”.

“In team sport I think it’s very common for successful teams to come together to do certain things that help build the camaraderie of a team, to be able to perform on the pitch,” Mills said.

“If that helps you compete then that’s what should be done.

“As a team sport, there’s always little things that you try to find to be able to come together and bond.

“Whatever is done shouldn’t distract them from the game.”

Mills praised the prominence of Indigenous flags and artwork throughout Australia’s base at the athletes village.

“It gave me chills just to see how much it was incorporated throughout our entire team,” he said.

“It’s something that’s very unifying, as the Olympic Games is.”

Matildas star Sam Kerr, asked about the Aboriginal flag after scoring a goal in Wednesday’s victory, told Seven her side was “really proud of it” and “wanted to do something that was relevant to our country and show unity within our group”.

Swimming star Cate Campbell, who is running for election on the IOC Athletes’ Commission and sits on the Australian equivalent, noted it was important for Olympians to strike a balance.

“To be able to express themselves, but also to be respectful of their other competitors,” Campbell said.

“Then we can all find a way to express ourselves on issues that we really feel strongly about.”

Triple the romance: Can casting three men in The Bachelor breathe new life into the franchise?
‘You are going’: Premier’s awkward Olympics orders
Today's Stories