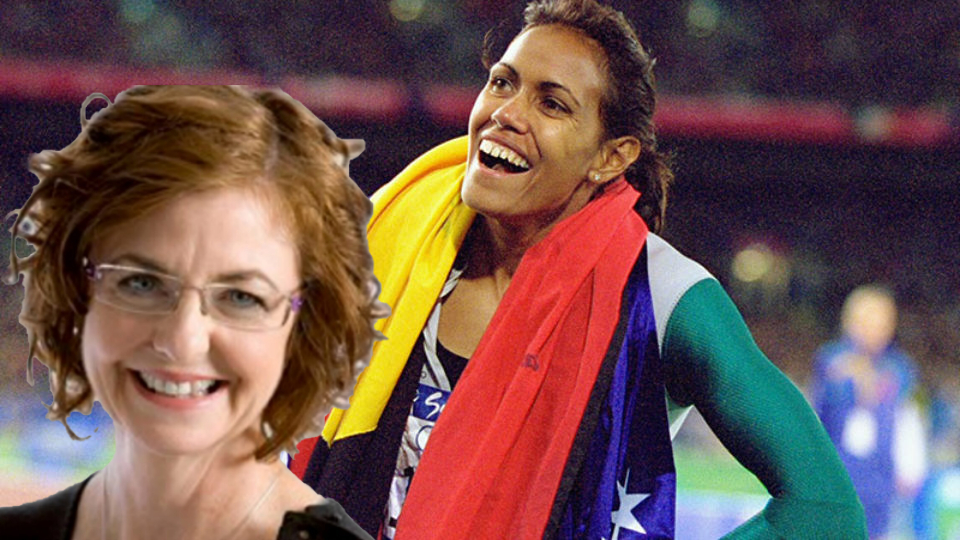 The Brisbane Olympics could be a Games that delivers a new narrative and unites the nation, writes Madonna King. Photo: Getty/TND
opinion

On the starting blocks for the 400 metres Sydney Olympic final, Cathy Freeman’s focus was impenetrable.

But as she raced to Olympic victory in front of the 112,524 spectators packed into Sydney Olympic Park, it was impossible not to feel a sweeping sense of pride.

Pride in an athlete, who had battled losses along the track to Olympic victory, and who had thrown thousands upon thousands of hours of hard work into one home-town minute.

Pride in our Indigenous history as Freeman, who had lit the Olympic torch, ran a victory lap showcasing to television audiences around the world the Aboriginal and the Australian national flags.

And pride in our nation, which celebrated this Sydney 2000 Olympics win for years, along with the athletes that competed in swimming and weightlifting, taekwondo and trampolining, equestrian and badminton and boxing and 21 other sports.

Freeman made up for all the nearly-wins, and even our disappointment in Marion Jones; the young American whose smile stole our hearts until we found out later that it was hiding her steroid use.

Even Jones’ three gold and two bronze medals – handed back years later – couldn’t rob us of the pride and sense of euphoria Freeman delivered to us on that evening, six days before the curtain closed on Australia’s last Olympic Games.

But now 21 years later, as Brisbane is named host for the XXXV Olympiad, it’s worth remembering something else.

Cathy Freeman was an Australian. Sure, she was born in Mackay and educated in Toowoomba – both in Queensland – but she and the 631 athletes representing our country on home soil in September 2000, were Australian above anything else.

We need to remember that, especially now, when a once-in-a-lifetime pandemic has robbed us of the interstate community that Sydney 2000 showcased.

Brisbane deserves the 2032 Olympic and Paralympic Games. It will be a fabulous host city. And the legacy of volunteerism left by the Sydney Games will be matched in some way by Brisbane. We have 11 years to figure that out.

But perhaps we can start with leaving the main competition to the venues that will pop up around south-east Queensland in 2032, and focusing now on making this an Australian Games, a Down Under Games, a Games that begins to mend the wounds between states torn open by COVID-19.

That would make a fitting legacy for all of us. But it would also create a game changer. Three levels of government working together, alongside each other. Liberal and Labor and any other colour that comes to power over the next decade.

This could be a the Games that delivers a new narrative.

A Games where women’s sport is celebrate – and paid – at equivalent rates to men’s sport.

A Games which provides the inspiration and impetus to sort out reconciliation.

A Games where deliberation over climate policy is assigned to the history books; there’s no disappointment, just action.

Where preservation of the Great Barrier Reef is internationally saluted.

Where we share the triumphs, whether we live in Daniel Andrews’ Victoria. Or Gladys Berejiklian’s New South Wales. Or Annastacia Palaszczuk’s Queensland. Or any other state, under the queue of leaders that will take the big jobs and the big offices between now and 2032.

But above all, where there is a new sense of nationalism, not built on jingoism but on seeing ourselves as Australian first, and state dwellers second.

That would ensure this pandemic doesn’t leave scars between different parts of Australia. It would be an antidote to a disease that has already stolen so much.

But it would also serve as a gold medal legacy for all of us.

Madonna King: How the 2032 Brisbane Olympics could be a game changer for Australia