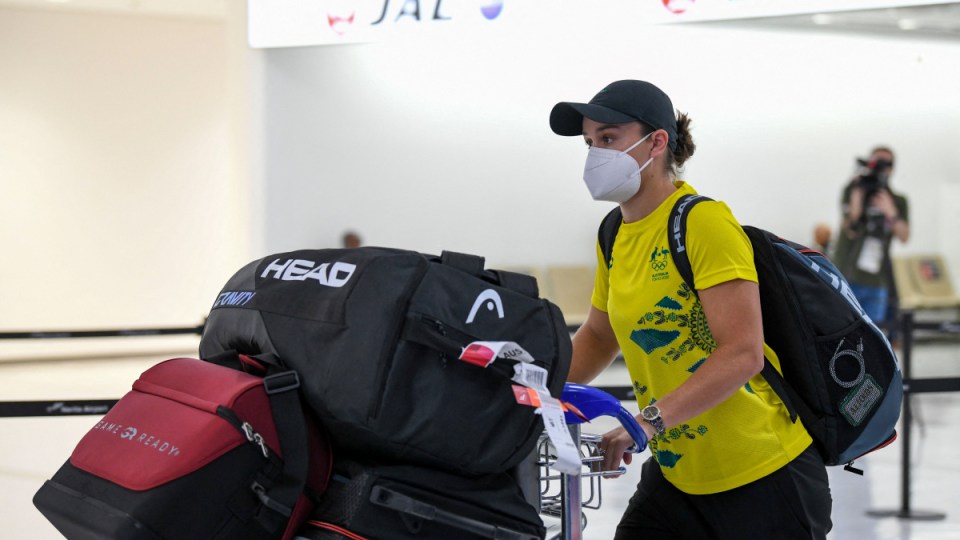 Barty arrived in Tokyo for the Olympics on Monday – but she wasn't heading to the athletes' village. Photo: Getty

Wimbledon champ Ash Barty will be based outside the athletes’ village during the Tokyo Olympics, with Australia’s team boss confident the alternate accommodation will bolster her bid for gold.

Barty, fresh from beating Karolina Pliskova in the Wimbledon final, has touched down in Japan for her first Olympics.

The world No.1 is among Australia’s leading medal contenders in Tokyo – with Simona Halep, Serena Williams, Bianca Andreescu, Sofia Kenin, Victoria Azarenka, Angelique Kerber and Coco Gauff absent for a range of reasons.

Numerous Olympians from around the world have chosen a different base for this and previous Games; the US men’s basketball team memorably stayed on a cruise ship for Rio 2016.

But the spectre of COVID-19 and associated biosecurity protocols have added a degree of complexity to such arrangements for Tokyo.

“We have a number of athletes staying outside the village. We allow that, it’s just what works best for them.

“Something I’ve always been very big on is driving performance takes a whole lot of flexible decisions, flexible options.

“In terms of her performance plan, it’s best served by her being able to control her environment and we respect that.”

Barty’s decision came as a prominent public health expert said he thought the athletes’ village’s biosecurity bubble was already “broken” and posed a risk of spreading infections to the general populace.

Games officials on Sunday reported the first coronavirus case among competitors in the athletes’ village in Tokyo, where 11,000 competitors are expected to stay.

Since July 2, Tokyo 2020 organisers have reported 58 positive cases among athletes, officials and journalists.

“It’s obvious that the bubble system is kind of broken,” Kenji Shibuya, the former director of the Institute for Population Health at King’s College London, said on Tuesday.

“My biggest concern is, of course, there will be a cluster of infections in the village or some of the accommodation and interaction with local people.”

Declarations like that only served to confuse and anger people, Professor Shibuya said, as actual conditions on the ground were “totally opposite”.

The 25-year-old, who could become Australia’s third Indigenous Olympic gold medallist if successful in Tokyo, dropped by the team’s base for a coffee on Tuesday morning.

“She is staying in an Australian environment where she can still easily access the village,” Chesterman said.

Australia’s Olympic tennis team were rocked by last week’s withdrawal of Alex de Minaur, who tested negative for COVID-19 at Wimbledon then contracted the virus after leaving London.

“They know they haven’t had contact with Alex during any critical period of time and their focus is now on making the most of their opportunity here,” Chesterman said.

Two members of Mexico’s Olympic baseball team, Hector Velazquez and Sammy Solis, have tested positive for COVID-19 at the team hotel before their departure for the Games.

USA Gymnastics said in a statement on Monday that an alternate on the star-studded women’s team had tested positive for COVID-19 in an Olympic training camp in Japan. Another had been placed into isolation because of contact tracing.

But Chesterman insisted that Australia’s Olympians remained “calm” about the expected development.

“We believe that’s been dealt with well. People have been moved to isolation quickly,” he said.

“Our athletes know they have to continue to follow the protocols to make sure their campaign stays on track.

“We know the protocols we’ve put in place are designed to keep them safe.

“You just need to be vigilant every day about the way you conduct yourself.”

The opening ceremony is on Friday but Olympic competition starts on Wednesday morning, when Australia’s softball team clash with Japan in Fukushima.

Also on Wednesday, Brisbane is set to be formally awarded hosting rights for the 2032 Olympics.

“It’s been a long campaign and we’re hopefully almost there,” Chesterman said.