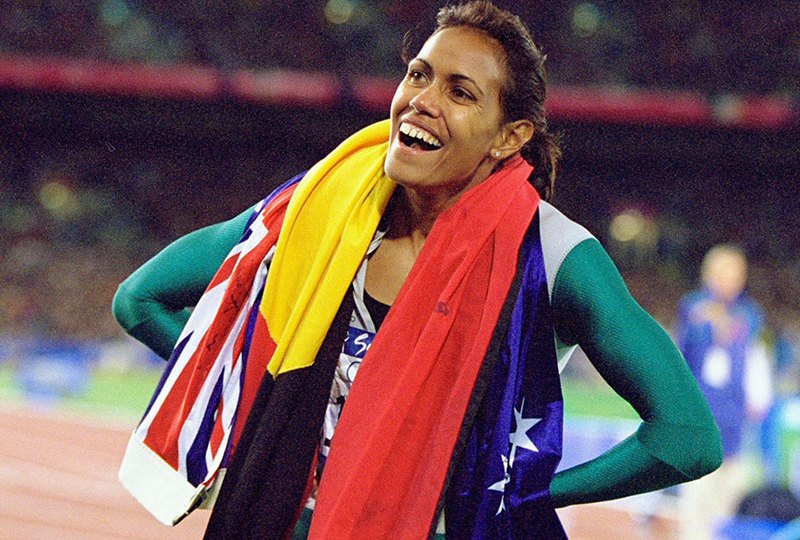 Cathy Freeman's victory lap at the Sydney Olympics was a pivotal moment along the road to reconciliation. Photo: Getty
opinion

Nostalgia is the golden thread that has made the Olympic movement great – and haven’t we been mining it for shiny bits throughout this anniversary week?

Held every four years, the world’s biggest sporting event has long served as a marker for global trends, politics and culture as much as it records the length of a discus throw or an athlete’s pace over 400 metres.

In Australia’s case, the two Olympic Games held in Melbourne in 1956 and Sydney in 2000 can now be clearly seen as defining moments in the history of the nation and the host cities.

The Victorian event is widely seen as the moment that city took its first tentative steps into a larger world, albeit kickstarting the destruction of the Marvellous Melbourne gold rush buildings that otherwise would have ensured it a rare place today as one of the most beautifully built environments in the world.

Post-1956 Melbourne morphed into a vibrant mix of cultures and influences, expanding on its sporting heritage and holding the Olympics to its breast like a politician wears a flag pin.

Monday’s 20th anniversary of the Sydney opening ceremony has prompted also the sort of rose-coloured reminisces that only sport or a long-lost love can bring.

But instead of lost buildings, Sydney and the nation may well ponder the lost promise of reconciliation with Indigenous Australians as – not for the first time – we spent the Olympics espousing one nation while going on to build another one entirely.

Sunday’s ABC documentary, Freeman, marked Cathy Freeman’s rise to prominence in Australia’s consciousness offered new insights into one of our most remarkable athletes.

Director Laurence Billiet painted a remarkable picture of the Queenslander’s journey as a unifying figure between black and white Australia, summed up by the 400m gold medallist reflecting on the moments after the pressure-packed run.

“Everybody was just … so one together,” Freeman wonders at the noise of the stadium as she sat on the ground and reflected on her achievement.

It was like we were the only people who existed in the world.’’

It’s an emotional moment even 20 years later but tempered somewhat by the knowledge that Freeman’s great strides were not to be matched by our leaders off track – in more ways than one.

As Australia basked in the closing glow of a successful Olympics we elevated ourselves on the joys of Fatso the fat-arsed wombat, Reg Mombassa’s crazy depictions of suburbia and Midnight Oil wearing ‘Sorry’ clothing to mark the injustices faced by the Stolen Generation.

In reality, we were less than a year from the horrors of September 11, 2001 which prompted a two-decade-long diversion into the vilification of asylum seekers as the Tampa sailed into Prime Minister John Howard’s politically-honed sights.

In the aftermath, with the political focus off the injustices faced by Indigenous Australians, Mr Howard rejected the notion of saying ‘sorry’ but did promise a referendum on constitutional recognition of Indigenous peoples in 2007.

That’s an issue still on the current government’s ‘to do’ list and which may yet also be put on the back burner amid the global pandemic that saw this year’s Tokyo Olympics postponed until 2021.

So for all the remembered tears shed this week for Freeman’s Olympic achievement, the back slapping for the Australia we looked set to become offered a more hollow ring.

In the years since Freeman’s run there has no doubt been greater recognition of the contribution and struggles of our Indigenous athletes, but there’s also no denying that the racism directed towards them has endured.

Despite all the good vibes offered up by elite sports’ ‘Indigenous rounds’ and the increasing willingness of players of colour to call out racism, the challenges remain.

AFL champion Adam Goodes left his sport broken by the boos of the crowd and a lack of support from league chiefs, while Brisbane Broncos legend Steve Renouf this year gave an emotional interview to NRL.com about his experiences as a young player.

In June, Carlton and Adelaide player Eddie Betts spoke about the abuse he and other Indigenous players received on social media and said more needed to be done to educate the public about the hurt it causes.

But it’s a hard road, with even the pre-2000 Olympics antics of serial idiot Sam Newman on the AFL Footy Show passed off as vaudeville 18 years on by former host and Collingwood president Eddie McGuire, who knows better but keep turning up in these debates.

And in 2020, politics even a fond sporting memory is grist for the mill in fermenting division and strife, with ABC presenter Patricia Karvelas finding herself embroiled in a stoush for offering up love for Freeman featuring three hearts in the colours of the Aboriginal flag.

In the end, it’s hard not to think that the 2000 Olympics got Australia to the starting line with a clear direction forward ahead, but only Freeman went the distance as the rest of us chased down invisible enemies and hunkered down in front of even bigger TVs

In Sunday’s documentary (available on ABC iview), the gold medallist summed up that one, magical night in Sydney when anything seemed possible – “It just feels like a dream”.

Cathy Freeman united Australia in 49.11 seconds. We spent the next two decades undoing it